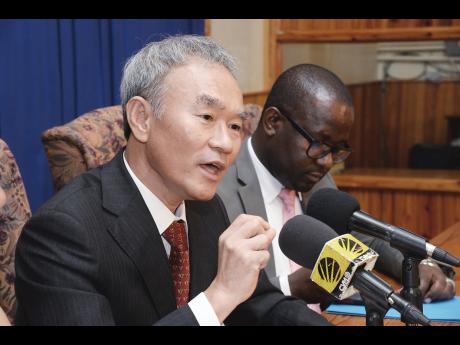 A 12-member Jamaican delegation, comprising members of the National Identification System (NIDS) implementation team, is to depart the island on July 14 for a visit to South Korea to garner first-hand experience and gain significant exposure to the best practices in the Asian country to help with the successful implementation of the system.

"We see this as a crucial component to go and see a system in operation that is supporting businesses, that is supporting the government, and one that is providing real benefits to the citizens," said Warren Vernon, NIDS project director.

"We want to have a look at their system, learn the best practices, learn also their mistakes to see how we can incorporate the best of it into our project. I am sure it will be useful," he said.

The trip is being paid for by the South Korean government as part of its second-phase assistance to the project. Similar assistance was provided under the first phase in 2014.

Vernon told The Gleaner that the visit was a critical element in understanding the impact the system could eventually have on e-governance and business development locally in terms of data sharing and security.

"We also expect to learn a lot from the Koreans in terms of data sharing, data usage and security in terms of how you go about protecting huge identity databases in the interest of the people," he stated.

"Most of the persons on the delegation would have had significant information communications technology experience, but identity management in Jamaica, apart from what is being done by the EOJ with fingerprint and using identity data to assert your identity for voting, most of Government would not be familiar with such system."

The delegation is expected to depart Jamaica on July 14 and will return on July 24. While in Korea, the group will go on study trips to relevant governmental agencies utilising Korean Resident Registration System - the national identification system in South Korea.

They will also participate in a special knowledge-sharing workshop on the national identification systems of both countries.

Charge d'affaires in the Embassy of the Republic of Korea, Young Gyu Lee, says the cooperation between Jamaica and South Korea on a project like the National Identification System (NIDS) underscores the close relationship between the two nations.

He said Korea feels rewarded by partly contributing to the NIDS, given that the system is one of the key projects of the Jamaican Government and that the NIDS may be modelled on the advanced Korean system.

"The successful establishment of NIDS will definitely lay the groundwork for efficiency and precision of all government services and bring with it elements of convenience and fairness that will surely improve the lives of Jamaicans," he noted.

Young gave the project his blessing, noting that he hopes the NIDS will be "in full blossom as scheduled, thanks to this invitation programme".

The delegation is made up of representatives involved in e-governance matters, taxation, labour and social security, the Registrar General's Department, the Office of the Prime Minister and Jamaica Post.