No need to press the panic button – Bartlett 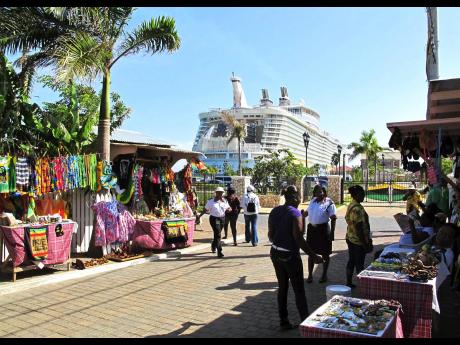 File
In this September 26, 2012 photo, the Royal Caribbean’s ‘Allure of the Seas’ cruise ship is docked in Falmouth, northern Jamaica, as street vendors sell clothes, souvenirs and other goods to tourists.

Tourism Minister Edmund Bartlett says the redeployment of cruise ships from Jamaica is never something the Government wants to see, but that such decisions are entirely up the cruise lines and the way they structure their itinerary.

Bartlett, who was reacting to recent reports that Royal Caribbean Cruises Ltd's Allure of the Seas would be leaving Jamaica for six months, starting April 2018, and that two other cruise ships would not be coming at all, said Jamaica's 2017-2018 cruise itinerary still looks very promising.

"There is no need to press the panic button," said Bartlett. "Cruise lines make their decisions not because they love you. Their itineraries are made two years in advance so this decision was on the cards. What has happened is more an economic decision than anything else.

"Royal Caribbean took a hard look at the Western Caribbean itinerary and made some decisions concerning Labadee in Haiti and the Falmouth Port. It didn't help with some of the problems we have been having in Falmouth," added Bartlett.

While not speaking specifically to the harassment issue, which has been cited as one of the concerns of cruise lines, Bartlett said steps would be taken to mitigate against the fallout so as to reduce the impact.

According to him, plans have been put in place to have Royal Caribbean's Monarch and some smaller vessels call on the town to address some of the shortfall.

"Minister without portfolio in charge of Economic Growth and Job Creation, Dr Horace Chang, and I have met with Royal Caribbean officials in Miami to discuss the situation," said Bartlett.

"We have been given the assurance that the ships will return on the 2019-2020 Western Caribbean itinerary. We have also put together a task force, to be headed by John Byles, to take a look at the Falmouth situation with the sole intention to fix and get it right."

He added: "We have to remain proactive and also understand the realities of the cruise sector. The cruise lines will always make decisions that they feel are in their best interest. The onus is on us to stay on top of our game and ensure that the safety of our guests is paramount, and that they are able to walk free without being badgered and harassed."

Said Bartlett: "I am convinced that Royal Caribbean continues to see us as valuable partners."