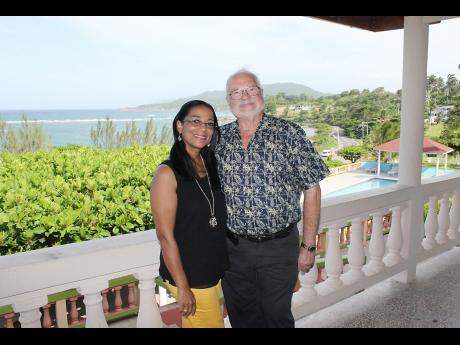 Although it's common for tourists to visit St Mary's north coast and become enamoured with the beguiling scenery and soothing ocean breeze, few American visitors fall so deeply in love that they commit to spending the next 30 years investing in the parish.

However, Paul Hilliard, the proprietor of the Casa Maria Hotel (CMH) in Port Maria, is one such individual. Since purchasing the hotel in 1987, the Washington-based medical seminar specialist has continuously developed the property, adding three new ocean-view rooms earlier this year.

During an informative discussion last week, Hilliard and his wife, Coleen, spoke about their passion for Jamaican history and plans to expand the 24-room hotel into a popular north coast recreation centre.

He told Rural Xpress: "I've been coming to Jamaica since 1984 and was out driving around one day when I stopped to see what was here. Back then, the hotel was derelict and deserted, but the staff were really welcoming and I fell in love with the view.

"I kept coming back and asked if anybody was selling a small ocean-view lot, and the next time I came back, someone said: 'Why don't you buy this place?' At first, I didn't think I could afford it, but I met with the owner, we started talking, and over the period of a week we put a deal together and I bought it.

"The reason I've held onto this place for so long is because I really believe it's a hidden gem and the prettiest location on the island. It's also one of the only properties in the area that's due east, so when the trade wind breeze blows, it's cooler than anywhere else on the island, and we don't have any mosquitoes because the breeze blows them away."

Hilliard is also captivated by St Mary's colourful but largely forgotten past. He explained: "There's the early history with Henry Morgan and his Look Out, which is located nearby, and Fort Haldane [the enclosure built by the British in 1759 to protect themselves against slave uprisings and Spanish raids] is also very close. It's just so sad more people don't know about these things.

"Lots of movie stars and people like [English playwright] Noel Coward, [James Bond creator] Ian Fleming, and [Oscar-winning James Bond actor] Sean Connery hung out at the CMH; and the bar stools they sat on are the same ones used today, although they've been covered a few times (laughs)."

Looking ahead, the Hilliards hope to upgrade both the property and the local area by developing a 15-room villa and a family fun centre on the adjacent beach.

Coleen, who comes from St Mary and married Paul nine years ago, said: "I want to bring back the type of 1960s environment where we can have some nice music and people of all ages can come out and have fun in a clean and relaxing atmosphere.

"We already have some of the best local and international cuisine, ranging from contemporary foods such as pizzas, crab cakes and pasta dishes, and local 'rundown' and oxtail. And the hotel is so cool that sometimes guests who are in rooms without airconditioning request extra blankets. The wind caresses you on your bed, so you can lie down and look right into the ocean, and you can't beat that."