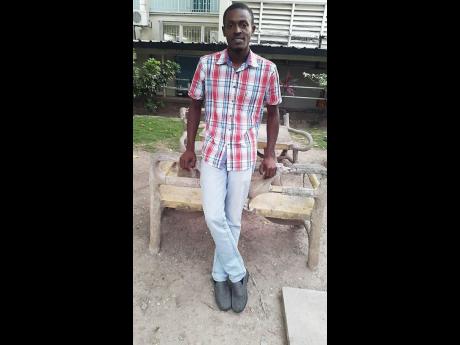 Peter Nelson, doctor of philosophy candidate at the University of the West Indies, Mona campus.

Fascinated by a simple experiment carried out with his "uneducated" mother, young Peter Nelson from the rural community of Hampton Court in St Thomas embarked on a journey that would soon afford him a doctor of philosophy (PhD) degree at age 25, securing his place as one of the youngest PhD graduates from the University of the West Indies (UWI), Mona.

"My mother was my first science teacher. One day, she gave me a mango and I ate it and planted the seed. After about a month it started to grow. I thought it was amazing, so when I got my dinner one day, I planted the bones and complained when they didn't grow into a chicken leg.

"She then had to explain to me why this did not work and said that this was science," he said, adding that this, coupled with inspiration drawn from the story of Thomas Phillip Lecky, motivated him to study in the field.

A past student of St Thomas Technical High School, Nelson revealed that he set a record by publishing 12 research articles in international peer review journals and two books, while completing his PhD in chemistry.

The young man was later granted a postdoctoral fellowship opportunity which sent him to the Weizmann Institute of Science in Israel, not only making him the first from UWI and the Caribbean there, but also the youngest at the institute in 2014.

According to him: "I was a postdoc in the department of materials and interfaces for two years, working under the guidance of Professor Jacob Sagiv and Dr Rivka Maoz. I was able to make several discoveries and to learn several new techniques while in Israel. I was also able to publish one article in a very prestigious journal."

Nelson, who now lectures and carry out research in the chemistry department at UWI, also recently launched a registered farming business called Benson Farms in Yallahs, St Thomas, that, according to him, has been operating successfully so far.

With a resume decorated with accolades, but not quite done yet, the now 29-year-old scholar and businessman told Rural Xpress that he has various ultimate goals.