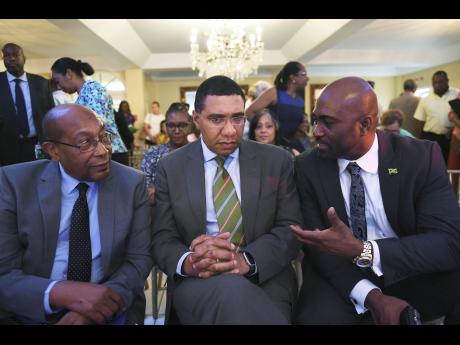 Gladstone Taylor
Prime Minister Andrew Holness (centre) in discussion with Professor Henry Lowe (left) and Andrew Wheatley, minister of science, energy and technology, at the special announcement on award of the Food and Drug Administration orphan-drug status for Chrysoeriol for the treatment of leukaemia, held at the Eden Gardens Wellness Resort and Spa on Wednesday.

Having achieved another first in the field of science for Jamaica, Dr Henry Lowe, whose continued research into the potential of ganja's medicinal value, has led to the development of a breakthrough drug, Chrysoeriol, that was recently granted orphan-drug approval by the Food and Drug Administration (FDA).

Chrysoeriol could be used to treat acute myeloid leukaemia (AML) in patients harbouring the FLT3 mutation. FLT3 is one of the most commonly mutated genes in AML patients. FLT3 mutations are found in about 30 per cent of patients' leukaemia cells.

The next step, according to Lowe, is to resist the sale of his newest discovery to venture capitalists. It is believed the drug, even at this stage, could fetch upward of US$50 million.

"What is good here is that next week, we can sell this development, but the unfortunate thing is if we sell it, we can get anywhere between US$15 million to US$50 million. I don't want that to happen," Lowe stated at the special announcement on award of the FDA's orphan-drug status for Chrysoeriol at Eden Gardens Wellness Resort and Spa in St Andrew on Wednesday.

"Our strategy is that although we could sell it and get some cash and do some other work, we would rather work with it and carry it on to as far forward as we can, license it to have some control. That is what we want to do."

There is only one drug available to treat AML, but only in a limited way and it is highly toxic. Chrysoeriol is very potent and relatively non-toxic and, therefore, will be highly desirable after it passes all the required steps to market. The estimated global market value of the drug is approximately US$3 billion.

The award represents the first time that any Jamaican or Caribbean national or country has ever been so recognised.

This puts Jamaica's science, technology and drug research and development in the same level of recognition as countries such as Israel, Brazil and other such countries involved in drug R&D from natural products.

Prime Minister Andrew Holness told the gathering of highly regarded luminaries of science that there is an explicit link between innovation and economic growth.

He said that the FDA's recognition of the drug is a practical manifestation of research and development stimulating innovation.

"It is certainly important that we combine and continue to catalyse entrepreneurship and research to stimulate job creations and economic growth," said Holness.

Science and Technology Minister Dr Andrew Wheatley has indicated his support for Dr Henry Lowe's decision to resist the sale of his latest homegrown scientific discovery to overseas venture capitalists.

"I must say I am in total agreement with Dr Lowe in relation to retaining the right to this particular discovery. As a country, it will not only serve as motivation, but from a financial perspective, you will be able to earn far more - at least 10 to 50 times more - from fully developing this product," Wheatley told The Gleaner on Wednesday.

Wheatley noted that the route being taken by Lowe and his team to bring the drug to market, is one that must be commended.

The orphan-drug status, Wheatley noted, is very rare and that the recognition given to Lowe and his team should be applauded.