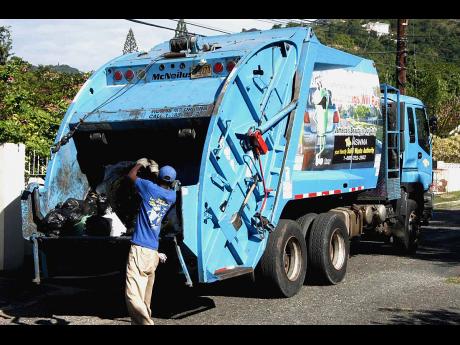 File
A National Solid Waste Management Authority worker loads one of the compactor trucks with garbage.

The public is being told to expect improved deportment from all drivers and pickup men employed to the state-owned garbage collection agency, the National Solid Waste Management Authority (NSWMA), by the end of July. Its executive director, Audley Gordon, said there has been a $30-million expenditure on training, uniforms and protective gear for these workers.

"You can expect to see a new-look team of garbage collectors by the end of July, and that is something that we will have to keep as our timeline, because some have already started in some areas to wear their new uniforms," Gordon said.

More than $30 million has been spent in acquiring brand new uniforms for collectors, and Gordon believes that should go a far way in easing one of the major concerns of the public.

ON THE RIGHT PATH

"Coupled with our improved scheduling and the NSWMA's overall strategy to deliver the best service to the people, I feel we are on the right path, having already spent that significant amount of funds to purchase uniforms for our workers, who are really the face of the agency," he said.

According to Gordon, the NSWMA has acquired uniform gear, including shirts, pants - made of a strong denim-type material - boots, caps, safety glasses, gloves and safety vests, among other things.

Deportment of NSWMA drivers, and in particular shabbily attired pickup men, has been among the concerns made to the authority by members of the public, but Gordon was quick to reassure the public that the improvements "highlights the NSWMA's push to have a deep-rooted professional look and approach to garbage collection".

"This is a vitally important service, and so it goes without saying that our workmen out there, the ones doing the dirty work literally, must be treated right and not look like the garbage they are collecting for disposal," he stated.

"We have already completed islandwide training for all our drivers and pickup men. Will this solve all our problems in terms of what the public demands of our workers? No, it won't, because one round of training will not fix everything."