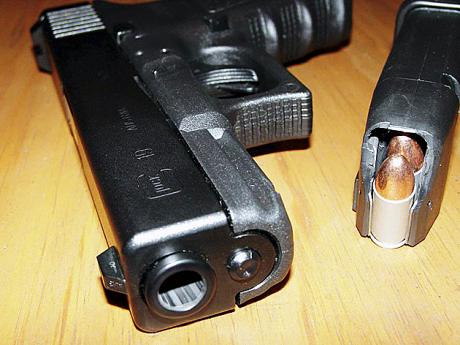 The Manchester Police say licensed firearms have become a hot item for burglars in the parish.

Head of the Manchester Police, Superintendent Wayne Cameron, says seven licensed firearms have been stolen from homes in the parish so far this year.

Supt Cameron says two of the owners of licensed firearms have been charged with negligence.

In the meantime, the Manchester Police chief says break-ins have become very organised in the parish.

He says these crimes are increasingly being carried out by persons posing as legitimate business persons to gain access to targeted premises.

Supt Cameron pointed to the recent arrest and charge of an operator of a pawn shop in Mandeville.

The pawn shop operator was charged with receiving stolen property, including furniture and appliances.

He was also charged with breaching the Customs Act after 22 cases of counterfeit rum was found in a bar operated by him.

And Supt Cameron is alerting citizens of the parish to a man who is accused of committing several break-ins.

He has been identified as former policeman Garnett Dixon, otherwise called Pollo.