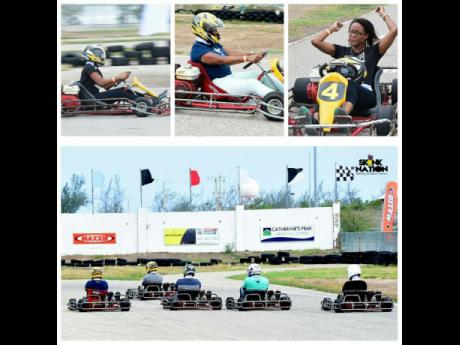 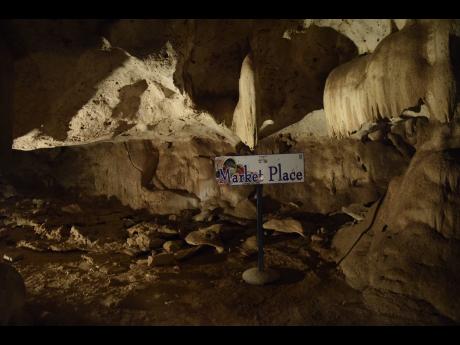 This is one of the notable sections of the cave as the rock formations look like fruit. 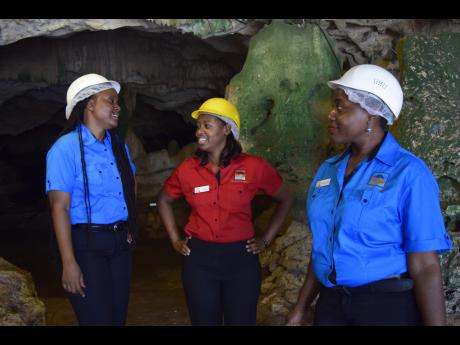 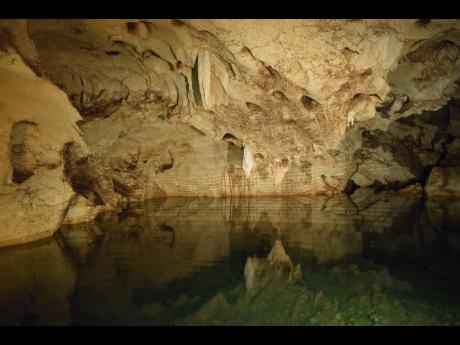 The water in the cave gives a crystal clear reflection of the rock formations above which sometimes tricks onlookers. 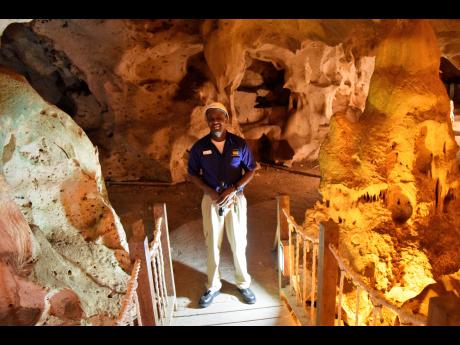 Tour guide, Chedd adds to the experience of the tour by pointing out important rock formations and bat sightings.
1
2
3
4
5

Jamaica is filled with rich historical monuments that help to tell the tale of our beautiful island. Green Grotto Caves and Attractions is one of many such places that will spark the curiosity and imagination of the young to the not so old. A deep sense of awareness and enchantment comes from diving head first into the place which once housed Jamaica's first inhabitants, The Tainos, and runaway slaves during the 18th century. The Green Grotto Caves is located just off the main north coast road, 3.2km east of Discovery Bay, and is an ecotourism attraction owned by the Urban Development Corporation (UDC).

The caves were first open to the public in December 1959 as a 'show caves' due to its historical involvement in the English takeover in 1655. It was sought after as a hideout by the Spanish, and was even used as a secret passage to escape off the island. The caves were also used during the two World Wars by smugglers to transport arms to Cuba. In more recent times, sections of the caves were used as rum storehouses.

The establishment offers a detailed tour of the cave, which will transport patrons into the inner 'heart' of Jamaica. "This guided tour lasts for 45 minutes and is three-quarters of a mile long," said Manager Ms. Sandraleen Tucker. The tour involves traversing through a maze of stalactites and stalagmites, along with many other form of dripstone formations. There are several interconnected pathways and chambers, which span around 37 metres down into the cave. This ends at the cave's innermost cavern known as the grotto. The grotto is a natural cave which was used by humans in both modern times and antiquity. Within it lies a body of translucent brackish water due to the mixing of sea and river water. It is here that one might see the "lair of batman" hidden among the rock formations. Every James Bond fan will receive a swell of nostalgia from recognising Doctor Kananga's underground base in the 1973 film, Live and Let Die, within the grotto.

The outward journey of the tour leads to the bewitching 'Wishing Well'. It is said that one could throw a coin for good luck, love or whatever the heart desires at this location. "There is special sensor lighting inside which minimises the disturbance of the ecosystem within the caves," said Tucker. "UDC has also installed bridges, which allow the ease of passage for patrons in flood-prone areas. The grotto itself is an amazing feature which everybody loves," explained Tucker.

Green Grotto Caves has also received Platinum Certification from EarthCheck in 2012 for successfully benchmarking and certifying annually for over 10 years. EarthCheck Certification is the global benchmarking and certification programme used by the travel and tourism industry. It is regarded and recognised as the largest certifier of sustainable travel and tourism businesses. The achievement of this prestigious certification has ranked Green Grotto Caves as a leader within the unique worldwide group of sustainable tourism operators.

Locals who are interested in visiting the Green Grotto Caves will pay an entry fee of $1,000 for ages 13 and upwards, and $500 from ages four to 12. There are also special packages offered to school groups, where students pay only $200 and $350 for accompanying adults.

"Several persons look forward to the experience gained from the tour. They will learn about Jamaican history which is not found in textbooks and get to see natural rock formations, which is only taught in theory," said Tucker. Green Grotto Caves and Attractions is not only a place to obtain a new experience, but an adventure to never forget.

Who is it for? A historian who is always eager to learn more about Jamaica.

If you have knee problems, you may have trouble taking the stairs to get down to the Grotto.

After the journey, you will, most likely, be sweating, so make plans to visit the closest beach.

The Ultimate Jerk Centre, which is parallel to the caves, serves great jerk chicken and other Jamaican cuisine.

Where: Palisadoes International Raceway. Look for a concealed entrance that is parallel to the Petcom gas station. Once you have passed the entrance point, keep left until you approach a gate with grandstand-like seats behind it.

Who is it for? If you have an adventurous side and like speed, then this will be a great experience. To really have fun, it's best to go with a group of six to eight persons.

info: You'll be given a complimentary tutorial by renowned race-car driver Peter Rae, who will take you around the track twice, using hand signals while in his go-kart to show how you should approach corners. Once you have done these introductory laps, you can decide to race against the clock for your friends.

- It's going to be hot, so bring something to drink.

- Keep in mind that the closest female bathroom is at the Petcom gas station, which is about 10 minutes from the track, if the person chooses to walk.

- If you have lower-back problems, bring a thick sponge to sit on while driving the go kart.

- It is extremely exhilarating, so be prepared to feel a bit fatigued after six laps.