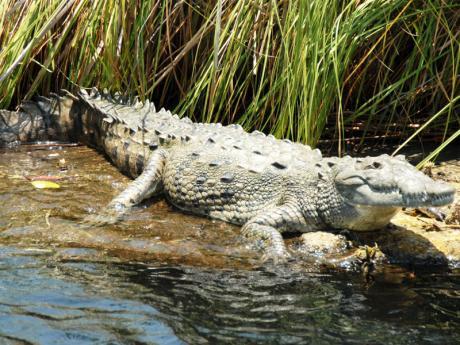 This crocodile takes a sun bath along the Black River. – File Photo

The National Environment and Planning Agency (NEPA) is reporting that an 11-foot crocodile sighted in a St Catherine canal on the weekend has been safely relocated.

The Agency says it received reports of the animal being in the waterway between 3 East and 3 West in Portmore on Saturday afternoon.

Through swift action by NEPA and the Urban Development Corporation the animal was restrained and removed from the canal.

NEPA says crocodiles often traverse the gullies and canals within the area which is historically a natural habitat for the protected animal.

NEPA is urging persons who may see crocodiles within their communities not to attempt to capture the animal, but rather to contact the Agency or make a report to the nearest police station.

The public is being reminded that it is an offence under the Wild Life Protection Act to possess, hunt, kill capture or wilfully molest the crocodile.

Individuals found guilty of the offence may be charged a maximum fine of $100,000 or face one year imprisonment.

NEPA says, during the period April 1, 2016 to March 31, 2017 the Agency successfully relocated 11 crocodiles within St Catherine with assistance from the UDC.