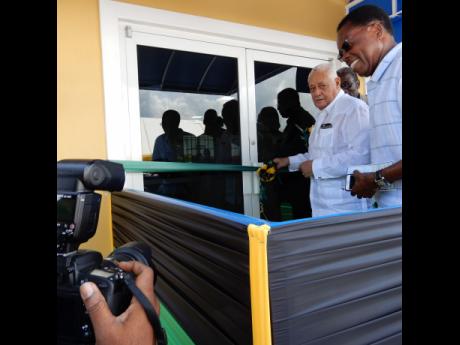 Member of Parliament and Transport Minister Mike Henry getting ready to cut the ribbon of the new administrative building for the Island Traffic Authority in May Pen, Clarendon.

In describing the collaboration, transport minister and Central Clarendon Member of Parliament Mike Henry said, "The depot represents the power of collaboration and innovation. It also represents a model for building innovation and developing ways to reuse materials to create a beautiful structure, a comfortable working and business space in a cost-effective way."

The construction was done at a cost of over $29.2 million, which the minister described as "value for money befitting any First World country".

The facility boasts two offices, an examination room, a reception area, a filing room, and a kitchenette, among other things, and will provide motorists with easier access to the services provided as well as the use of technology in the preparation of fitness certificates for motor vehicles.

Henry urged that members of the community be trained in the principles of construction safety.

"In this regard, the CMI, in conjunction with the Denbigh High School and the constituency office of Central Clarendon, trained over 30 persons," said Henry.

Diverting from the occasion at hand, Henry used the opportunity to highlight what he termed "hot-button issues that are bedevilling the town of May Pen".

Speaking about a leaking roof debacle at the May Pen Hospital, he said that he was placing the blame squarely at the feet of the current board of governors of the Southern Regional Health Authority (SRHA).

"As MP for Central Clarendon, I have been painfully aware of the extent of the situation for some time, and I have been urging SRHA to act quickly to fix the problem but to no avail," he said. He added that the funds have been in place to effect the repairs, but his insistence to treat the matter with the urgency it deserves has been ignored to the detriment of the patients.

"They opted for the tender process amidst the suffering and inconvenience of the people, including staff members who are woefully traumatised and stressed."