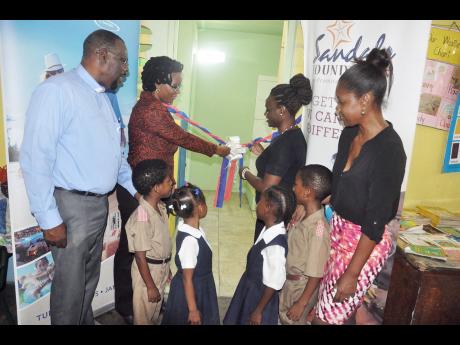 Contributed
Sandals Foundation ambassador at Sandals Negril, Dalasha Ferguson (front row right), and Susan Hammond (front row left), principal at Petersfield Primary and Infant School in Westmoreland, lead the charge as they get ready to unveil a brand new bathroom facility donated to the infant department. Looking on is the school’s chairman, Rev Hartley Perrin (left), as well as infant teacher Marcia Dixon (right) and some of her students. 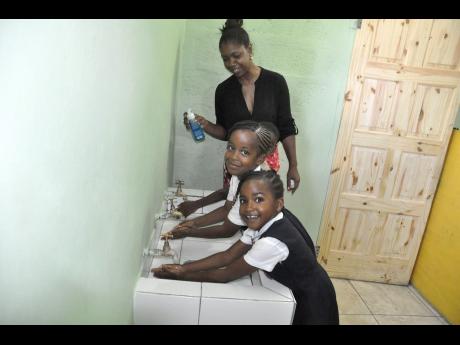 Contributed
Marcia Dixon, teacher in the infant department at the Petersfield Primary and Infant School in Westmoreland and a few of her students are already enjoying the new bathroom facility
1
2

Come September, close to 90 infants of the Petersfield Primary and Infant School in Westmoreland will have a brand new bathroom facility, courtesy of the Sandals Foundation's Negril representatives.

The facility is as a result of the foundation's annual Team Member Support Project, an initiative that actively encourages Sandals' employees to identify projects in and around their communities supporting education, community and the environment.

The school's infant department was thoroughly outfitted with both boy and girl bathrooms. The project valued at US$2,500 was selected after the foundation's ambassador and assistant cost controller at Sandals Negril, Dalasha Ferguson, saw the need and brought it to the attention of the representatives at the resort.

Following an onsite assessment, it was discovered that the infants had to go too far a distance to access the regular bathroom facility serving the entire school population. They were further hampered whenever it rained.

Principal at the school, Susan Hammond, says the donation was quite timely.

"Bathrooms for the infant department were greatly needed and that was one of our priority areas of improvement. The population at the school has grown tremendously and we were not able to do this on our own. We are so appreciative that the foundation decided to come in and assist us. I applaud them for the awesome job they have been doing at all levels," she said.

"When you create a positive impact on a child, you inevitably impact the nation, and that is what the Sandals Foundation continues to do. I am glad that this project was considered, and they have left a number of children happy," Ferguson said.