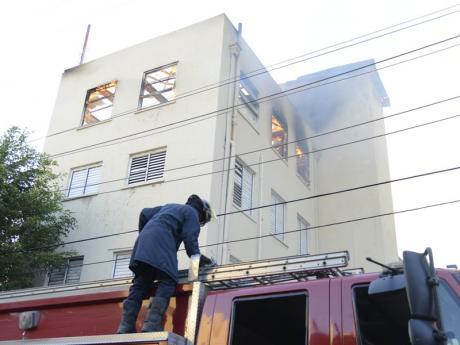 In this 2015 file photo firefighters respond to a blaze at the Duke Street building that housed the Coroner's Court and the Family Court Attendance Centre.

About 90 per cent of files destroyed in a 2015 fire that engulfed the Coroner’s and Special Coroner’s Courts have been reconstructed.

Chief Justice Zaila McCalla says 67 of the 77 active files, which were destroyed, have been replaced.

She says six of the remaining 10 files are in the process of being reconstructed.

McCalla was speaking at a recent ceremony for the official handover of a building to house the courts at 119A Maxfield Avenue, St Andrew.

The process to recover the files began in January 2016.

Meanwhile, the Chief Justice says work has been ongoing in the courts, which had been operating out of the Corporate Area Civil Court since the fire.

She says 76 of the 101 files that came into the system were disposed of, while others are at various stages of completion.

Thirty-four files have been received for the year up to April, and 24 have been dealt with.