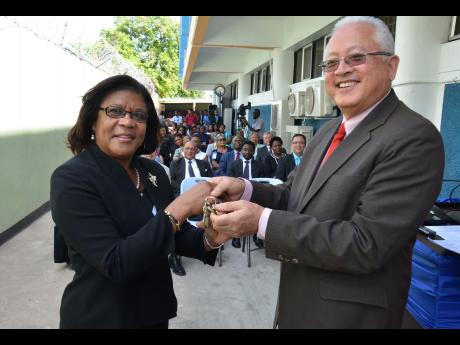 About 90 per cent of files destroyed in a 2015 fire that engulfed the Coroner's and Special Coroner's Courts have been reconstructed.

Chief Justice Zaila McCalla, said 67 of the 77 active files, which were destroyed, have been replaced. She informed that six of the remaining 10 files are in the process of being reconstructed.

McCalla was speaking at a recent ceremony for the official handover of a building to house the courts at 119A Maxfield Avenue, St. Andrew.

She expressed gratitude to the agencies that provided the content enabling the recovery of the critical information that was lost.

They include the Jamaica Constabulary Force (JCF), Institute of Forensic Sciences and Legal Medicine at the Kingston Public Hospital, University Hospital of the West Indies, and the Department of Correctional Services. The process to recover the files began in January 2016.

"It is anticipated that with the level of cooperation being given by the entities mentioned, (the remaining files) will be reconstructed in short order," McCalla said.

Meanwhile, the Chief Justice said that work has been ongoing in the courts, which had been operating out of the Corporate Area Civil Court since the fire.

She informed that last year, 76 of the 101 files that came into the system were disposed of, while others are at various stages of completion. Thirty-four files have been received for the year up to April, and 24 have been dealt with.

"Please be assured that the matters related to deceased persons are being treated with respect and are being given due consideration," McCalla said.

The Chief Justice thanked the Ministry of Justice for the new building and furnishings to accommodate the courts, noting that the facilities are "aesthetically pleasing, timely and much appreciated".

McCalla noted that the relocation of the courts from the Corporate Area Civil Court will not just alleviate overcrowding, but will enable the assignment of a third parish judge "so as to make the waiting time for matters much shorter".

The courts were opened on June 12.