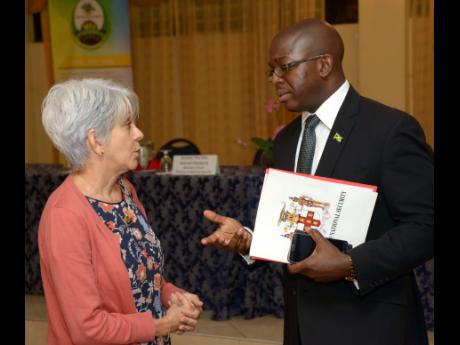 Ian Allen
State Minister in the Ministry of National Security Pearnel Charles Jr (right) in discussion with Dr Elizabeth Ward, executive director of the Violence prevention Alliance, before the start of a conference which focused on violence against children at the UWI, Mona, last Thursday.

Head of the Violence Prevention Alliance, Dr Elizabeth Ward, has rubbished two of the often-repeated proposals to fight the frightening crime monster stalking the land.

Ward said the proposed buy-back of illegal guns and getting more youngsters involved in the cadet movement are ineffective long-term violence prevention strategies.

According to Ward, local and international studies have shown that 'gun buy-back' and 'programmes based on military training', such as cadets, are among strategies that will result in only short-term behavioural change among some persons.

Ward acknowledged that with 86 per cent of murders locally being committed with the use of a gun, controlling the availability of guns is critical but she argued that internationally, the data says providing money for gun buy-back doesn't work.

"That doesn't mean that you can't get the guns out of circulation but we have to look carefully at the strategy. A more comprehensive approach is needed and I think the first part of it is to make sure the guns are not used.

"This can be achieved by improving the security within zones and improving things like community policing, neighbourhood watches, citizens' involvement in the peace in the community. All of these things are going to be very important in that process of reducing the level of gun violence," said Ward.

But Senior Superintendent of Police Desmond Brooks told The Sunday Gleaner that a 'gun buy-back' would be just one of many strategies used by the police to remove some of the illegal weapons from the nation's streets.

"We have a multiplicity of weapons out there; that's a matter of fact and we are also a poor country; people need money," said Brooks.

Incentive for handing over

"We can ask people to hand over weapons but where is the incentive for them to do this? If we can incentivise this, what will happen is that people who own weapons may decide to sell them and people who don't own weapons but know where illegal weapons are, they can give information."

As it relates to programmes based on paramilitary training, such as cadets, Ward said while it is beneficial for some youngsters to be involved in the discipline based group it is not for everyone.

"It is very bad for certain people, especially people who have grown up with a lot of violence in their lives, as it is not a cure to prevent persons from getting involved in further violence," Ward reasoned.

"It is very important to have proper screening. A lot of children who have grown up and their fathers have been killed, their main aim is to become a member of these groups to get a gun to kill the person who killed their relative. We have to deal with the trauma long before we deal with the strict regimentation," added Ward.

She said some of the things that have been found to work in achieving long-term behavioural change include early-childhood education, home visiting, parenting training, life skills training, academic enrichment for those who are failing in school and educational incentives for at-risk students.

"It is also very important that we have the right laws, and not only that but we have them implemented and then enforced," Ward said.