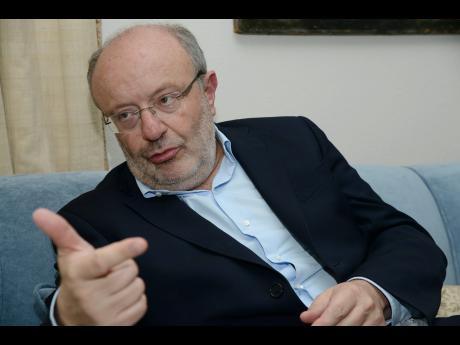 Fernando Garcia Casas, the Spanish secretary of state for international cooperation for Latin America and the Caribbean, has underscored what he described as a binding link between Spain and Jamaica since the first Spaniards landed on the island in 1494.

Garcia Casas, who was on an island hop in the region, pointed out that the countries have, especially in recent years, grown closer, due mainly to the business of hotel construction.

He noted that Spain has pumped millions of US dollars into the Jamaican economy by way of investment in the construction of several hotels and through other related services.

"I wanted to come here because I believe we are much bigger partners than we imagine. Not many people know that Spain is the second-biggest investor in Jamaica right after the United States," said Garcia Casas.

"Spain will be looking to further solidify its presence in other areas such as construction, clean energy and agriculture. These areas are ready for investments. We already have a significant portfolio in the hotel construction sector, with 1,000 more rooms about to be added," said Garcia Casas.

He said that Spain, being a powerful member of the European Union, makes it easy for bilateral relations with Jamaica.

"I believe that many more things can be done between the two countries and we are proud of our strong relationship," said Garcia Casas, as he added that Jamaica could benefit from Spain's know-how in the renewable energy field.

Spain is a world leader in the renewable energy sector, with a huge outlay in the hydro, wind and solar industry, and Garcia Casas said the two countries can add more cooperation in these areas.

"We believe we can have more investment here in Jamaica. We have here the first tourist from Spain to visit the island in 1494, which was Christopher Columbus, if I can say so, and since then it is important to note our bilateral and historic links."