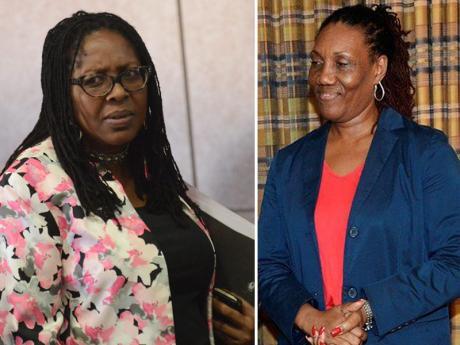 The two candidates seeking to be the People’s National Party (PNP) standard bearer in the St Andrew South West constituency are this afternoon are seeking to end suggestions of an acrimonious battle between them.

Councillor for the Payne Land Division in St Andrew South West, Audrey Smith Facey, and her rival PNP vice-president and councilor for the Norman Gardens division in East Kingston, Angella Brown Burke, both attended a press conference this afternoon to discuss the impending selection exercise.

However, this afternoon at the party’s headquarters on Old Hope Road in St Andrew both women maintained they continue to enjoy a good relationship.

Councilor for the Norman Gardens division in East Kingston, Angella Brown Burke, and before her Councillor for the Payne Land Division in St Andrew South West, Audrey Smith Facey.

They also pledged to uphold the constitution of the party as well as its principles and objectives as they prepare to do battle.

Director of elections for Sunday delegates’ conference Julian Robinson who is the general secretary of the party told journalists the code of conduct requires them to avoid personal attacks, among other things.

At Sunday’s delegates’ conference to be held at Caribbean Palm’s Community Centre 1,927 delegates will be eligible to vote.

The delegates will cast their ballots between 10 o’clock in the morning and 4 o’clock in the afternoon and a winner is expected to be declared by 6 o’clock.

Each voter will have to present proper identification in the form of a passport, voter’s ID or a driver’s licence before being allowed to vote.