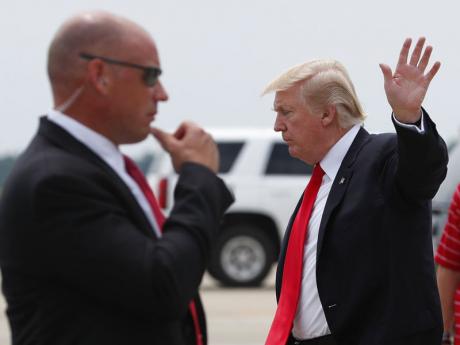 US President Donald Trump (right) waves as he walks to his motorcade as he arrives on Air Force One at Dulles International Airport in Dulles, Virginia recently. – AP

A Jamaican man, who is set to be deported from the United States tomorrow, is appealing for President Donald Trump to halt his removal.

A report on foxnews.com says Hugh Williams is set to be deported over a 2002 felony marijuana conviction his lawyer said was the result of shoddy legal advice given by an attorney who is now disbarred.

Williams has reportedly lived in Connecticut for nearly 20 years, works as a supervisor at the Home Depot and is married with three sons, one of whom is in the US military.

The deportation order for the 37-year-old was issued in 2012 but not enforced until President Trump unveiled new immigration policies that have consequently brought old deportation orders to new life.

Fox news says Williams was arrested in 2002 for felony possession of marijuana, which his lawyer, Ryan McGuigan said was his first and only arrest in his life.

McGuigan says based on advice from his attorney at the time, Williams pleaded not guilty to felony possession of marijuana and served three years of probation without incident.

The attorney, Joseph Dimyan, who was later disbarred for stealing money from his own clients, also advised the father of three to use a pseudonym while he was in court.

But on a return trip from Jamaica 10 years later, Williams was held up in US Customs at John F. Kennedy International Airport after a fingerprint scanner revealed he had previously been convicted of a drug charge using a false name.

Williams was soon issued a deportation order, but it was not enforced, until Trump took office.

He is now hoping for a pardon from Trump, for whom he voted in the presidential election last year.

His lawyer argues that had Williams been charged with the same offense today, he could have used a drug program or pled to an infraction.