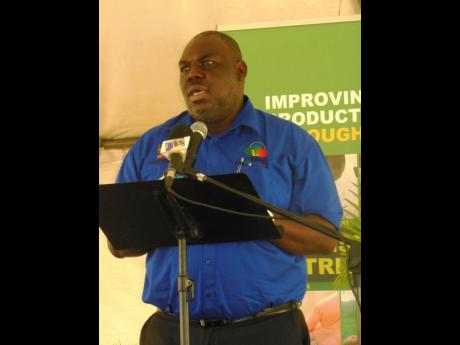 Permanent Secretary in the Ministry of Agriculture and Fisheries, Donovan Stanberry.

More than 180 years after the abolition of slavery throughout the British Empire, small farmers in Jamaica are still being held captive to the legacy of that dark period in the country's history, according to Donovan Stanberry, permanent secretary in the Ministry of Industry, Commerce, Agriculture and Fisheries.

"Our history of sugar and slavery has resulted in the commandeering of our best lands for estate crops and a deliberate and conscious, in my view, subjugation of small farmers, relegating them to the most marginal pieces of land which are very challenging - on hillsides," he told Tuesday's Plenary Session 2 of the Jamaica 55 Diaspora Conference 2017 at the Jamaica Conference Centre.

Stanberry, who was one of four presenters on agriculture, said the reality of most local farmers operating on less than one acre of marginal land continues to be a hindrance to improving production and productivity in any tangible way. Add to that the heavy dependence on rain-fed agriculture, poor farm roads, lack of traceability and quality assurance, among other systemic deficiencies, and local farmers still have a lot of catching up to do, he explained, before offering a remedy.

"Obviously, if agriculture is to make that quantum leap and make even a greater contribution to economic growth and development, then we have to fix those weaknesses. And the whole matter of climate change is only exacerbating the situation because we now have more prolonged droughts and more intense and frequent rainfall vents. Therefore, we have to invest significantly in irrigation, in land husbandry, terracing - measures to combat erosion - if we are going to make agriculture more sustainable, more reliable and production more predictable," he said.

Stanberry, who has served as permanent secretary for the agriculture portfolio since 1996, said the Government's defined role in addressing this long-standing problem is to create an enabling framework to attract and facilitate the requisite developmental investment.

He said, "So what we have done through our agro-park programme is to identify private and public lands which are big enough. Install in those spaces the requisite infrastructure that will make for sustainable and consistent production. Things like roads, irrigation, drainage, and so on, put those lands in the hands of our farmers, and also link the people who operate in those spaces with the market - whether in tourism or overseas, and so on - and saturate the whole thing with quality extension service and research."

Stanberry also underscored the importance of investing more in research in dealing with pests and diseases, as well as the development of better crop varieties, as well as livestock improvement.