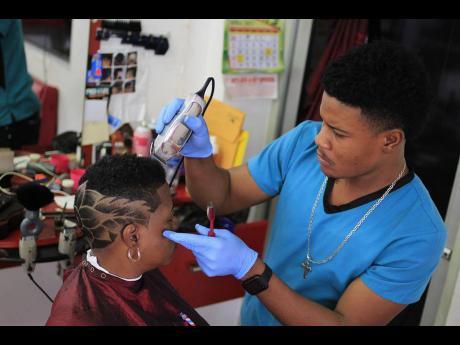 Contributed
Anthony King attends to one of his customers. 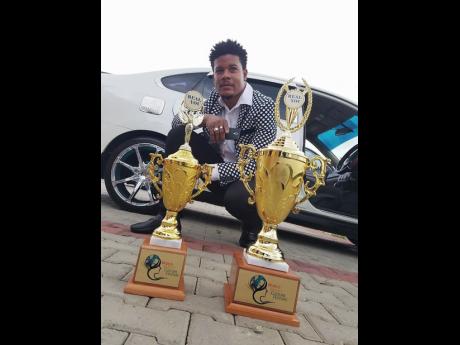 Hundreds of fellow parishioners flooded Facebook to congratulate 24-year-old Anthony Drysdale of St Thomas who was recently named Top Barber of the Caribbean.

Drysdale, who goes by the name Anthony King, was one of 10 participants in the World Beauty Culture Festival Barber Show, held in Trinidad and Tobago last month.

The native of Hampstead in Yallahs said he has entered and won quite a few barber shows, both locally and internationally, and welcomed the opportunity to participate in yet another when he was called upon and notified by the barber association in Trinidad.

Anthony King, a man confident in his ability to sharply fade and design any head of hair, explained that he was not at all surprised by the win, but still extremely grateful.

Speaking of his hobby-turned-career, Drysdale told Rural Xpress that he has long been fascinated with the skill.

"While I was growing up, I used to love to go by the barbershops and sit and watch the barbers cutting hair. Then I'd go home after and try it out on my younger brothers. Since then, I took it on and then, well, the sky is the limit," he said, adding that he has been operating professionally since he was 16 years old.

Drysdale, who revealed that he is among the most sought-after barbers in Trinidad, where he has been operating for the last five years, credited the best part about being a barber to three characteristics.

"One, you'll always be employed because people are always trimming their hair. Two, you get to meet a lot of people from various classes in society and, three, you're always important in people's lives, except Rastas," he said, as he laughed out loud.

It is for these, among other reasons, that the trimming sensation explained that he is now on a mission to vocationalise the skill.

"Right now, I'm working on getting barbering into schools. You know, just as how they learn mechanics and engineering, so, too, should they be able to learn the basics of barbering in schools. Make it into a subject, give them the option to choose.

"Barbering is a skill and a job. The youth should have the option to learn it if it's something they love or are interested in. Barbers will always be relevant," he said.