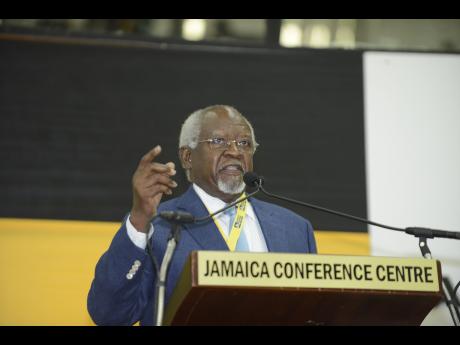 Jamaica needs to take charge of its natural, human and other resources in a structured way to reverse the dependency on imported foods, as a first step to economic independence, was the charge from Dr Julius Garvey to the second plenary session of the Jamaica 55 Diaspora Conference 2017 at the Jamaica Conference Centre on Tuesday.

"Our land, our labour are being used to produce our resources for the marketing, you might say, of rich people, either in this country or abroad, and this is a pattern that has gone on obviously since colonialism. And we've fallen into the same situation in terms of the World Trade Organization and the IMF (Internal Monetary Fund) and the conditionalities. So it's time for us to reverse that. We need to use our land, our labour and our resources for ourselves, in terms of production, and you know we have to be able to feed ourselves. I mean, that's fairly simple. We can't depend on imported food," the executive director of operations of Farm Up Jamaica told The Gleaner.

"We have US$800 million worth of food that we are importing and we have wonderful weather. We can grow three or four crops per year. We should be able to feed ourselves and be self-sufficient in terms of food. So this is why I'm involved with Farm Up Jamaica, and we want to move that forward."

Agriculture, he said, is the most important of humanity's activities, the engine of rural employment, and the foundation of sustainable development and a healthy lifestyle. However, over the past 60 years, food production, processing and distribution has been taken out of the hands of small farmers and producers and placed in the hands of global corporate giants such as Cargill, Monsanto, Philip Morris, and Nestle, a mistake for which the world will continue to pay dearly, Garvey warned.

According to Dr Julius Garvey, "Monoculture (cultivation of a single crop in a given area), artificial fertilisers, pesticides, genetically modified organisms, heavily subsidised agri-business, and unfair global trade rules set by the World Trade Organization have given us industrialisation and globalisation of our food system. This has led to monoculture farms that have put a burden on our groundwater and energy resources; it has caused the disappearance of species and pesticide pollution; and has resulted in destabilisation of the climate."

Speaking on Tuesday to the second plenary session of the Jamaica 55 Diaspora Conference 2017 at the Jamaica Conference Centre, he said this system endangers the delicate balance between nature and culture that supports our very existence, pointing to the inappropriate development in the interest of the rich and those consumers in rich countries.

"Third-World production capacity has therefore been utilised in the interest of the rich, and we're trapped by the priorities of private wealth creation. Clearly, a paradigm shift is needed. Third-World land, labour and capital need to be devoted to Third World needs," noted the executive director of operations of Farm Up Jamaica.

"What is needed to change the industrial agricultural paradigm are small, bio-diverse organic farms, free of chemicals, toxins and patented seeds so that we can bypass the corporate food empire. Agro-ecology is increasingly recognised as the way forward, capable of increasing productivity goals without depleting the soil and environment and disempowering communities."