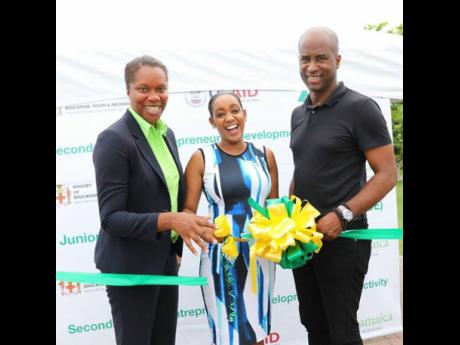 Junior Achievement Jamaica (JAJ) voted St Jago High School the Company of the Year for the 2017 JA Company of Entrepreneurs Programme (JACE). The innovators were awarded the winning trophy and $500,000 for their company called Desin Chic, which produced stands for smart phones.

JACE said the top three schools were selected based on their business plan and their final business report, which reflected how they operated their companies over the 2016-17 school year.

Schools were also able to gain points through participation in the National Careers Week Regional Forum, where their businesses were pitched to judges, participation in social media and marketing competitions, and their activities around corporate social responsibility during the year.

JAJ also showcased the work of student companies and products created in the 2016-17 school year as part of the JACE programme.

At the Entrepreneurial Youth Expo, the public was able to view the students' products which were on display, including, smart phone holders, fruit snacks, mosquito repellents made from fruits, customised drawstring bags and cosmetic bags, lip balm, pictorial key rings and natural juices.

Cornwall College won the Viewers' Choice Award based on votes for best product, best booth set up and best signage. They also won the Most Innovative Product Award based on their pitch and product dynamics with the judges.

According to Alphie Mullings Aiken, president, JAJ, students who developed products and companies last academic year as part of the JACE programme, demonstrated potential towards entrepreneurship, especially in the companies and products which they developed.

She explained that in the upcoming academic year, USAID, in partnership with the Ministry of Education, Youth and Information and national partners Jamaica Public Service and CITI, will support an expanded format of the JACE Programme, which will see the integration of the programme into the education system, where all ninth-grade students across the 168 high schools in Jamaica will be exposed to entrepreneurship.