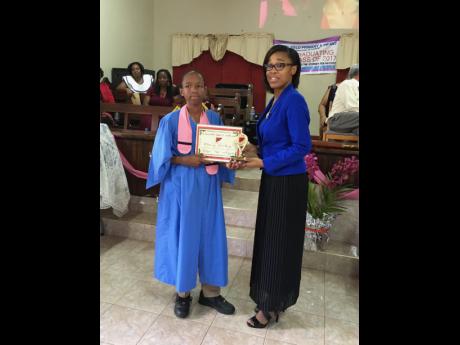 Contributed
Kerene Nelson, LASCO/MoEYI Teacher of the Year 2016-2017, presents a trophy and certificate to Glenroy Dockery, the first recipient of the Kerene Nelson Signature of Excellence Fund, during the Schoolfield Primary and Infant School Graduation Ceremony held on Wednesday, July 5.  Dockery, a grade-six student, achieved an overall average of 70 per cent or higher on his Primary School Exit Exams and School work, displayed exemplary deportment and behaviour.

He's a boy of few words, but Glenroy Dockery certainly knows the significance of being a recipient of Kerene Nelson's Signature of Excellence Fund award.

Dockery is the first beneficiary of the award that was conceptualised by Nelson, the LASCO/Ministry of Education, Youth and Information (MoEYI) Teacher of the Year 2016-2017. The aim of the fund is to provide financial assistance to students of Schoolfield Primary and Infant School in St Elizabeth.

Dockery, who turned 13 in June, said he was overjoyed and surprised by the news, but knew he was rewarded because of his good grades. "I think I got it because I worked hard, and because I am in need," he said.

"Glenroy is one of the students who does not attend school very often because of his financial challenges, and when he does, he comes with a lack of certain resources," she said.

Roper-Allen, who began serving as principal in May 2016, said she was immediately drawn to Dockery because of his positive attitude towards school despite his challenges.

Dockery was able to achieve an average of over 75 in the Grade Six Achievement Test, making him the top-performing male student at the school. He was placed at Black River High School in the parish capital.

"It means that every child in a similar situation will know that the show doesn't stop with challenges," Roper-Allen added.

The educator described the LASCO/MoEYI Teacher of the Year's scholarship fund as a blessing. "When I saw that he passed for Black River High, I prayed. I wondered what would happen to Glenroy. How would I ensure that he gets to school and has meals and those things?" Roper-Allen said.

The following day, through the work of God, according to Roper-Allen, Nelson phoned her with her plans to start a fund to help needy students. Nelson, she said, had been involved with Schoolfield through a project she launched to train teachers there in Spanish education.

"Teaching is my passion, but equally significant and important to me is providing service in any way possible. Assisting any student to attend school more regularly indeed satisfies me, because power is given to him or her," Nelson said.

Through Kerene Nelson's Signature of Excellence Fund, Dockery will receive $40,000 to assist with transportation and lunch. A total of $15,000 has been earmarked for the Christmas term, with $12,500 for the Easter and Summer terms respectively.

These amounts will be disbursed by the school's guidance counsellor/bursar and the awardee is expected to sign for each amount received.

Glenroy Dockery Snr said the scholarship will be of great assistance for his son. "I hope he continues to do well in school. I even want his average to reach to the 90s at Black River High. I really just want him to come out to something," he said.