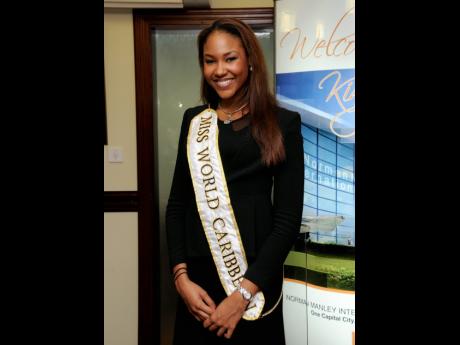 Ambassador for the Sickle Cell Support Foundation of Jamaica and member of the Jamaican Diaspora in the United Kingdom (UK), Gina Hargitay, is calling for persons to help fight the sickle cell disease, through charity.

The Miss Jamaica World 2013, speaking recently at the Jamaica 55 Diaspora Conference in Kingston, said she was in the process of launching her foundation to support the cause, but is appealing to persons to give to the Sickle Cell Support Foundation of Jamaica.

She said her foundation "will be trying to pledge $1 million every year for the Sickle Cell Support Foundation of Jamaica, as well as assist in raising awareness of the disease".

The foundation is slated to be launched by the end of 2017.

Hargitay noted that many people are affected by the disease in Jamaica, adding that she and other members of her family are afflicted with the trait and the disease. She said her dream is to see the elimination of the disease.

She said that the Diaspora Conference helped with collaboration and networking opportunities in order to assist with her fundraising efforts.

Meanwhile, Hargitay said she is involved with other charities, including 'Jamaicans inspired UK', and she is also an ambassador for the international charity, 'Shashamane Sunrise'.

She noted that the Shashamane Sunrise charity does work in six countries, namely Jamaica, Haiti, Trinidad and Tobago, Ethiopia, Uganda, and Kenya.