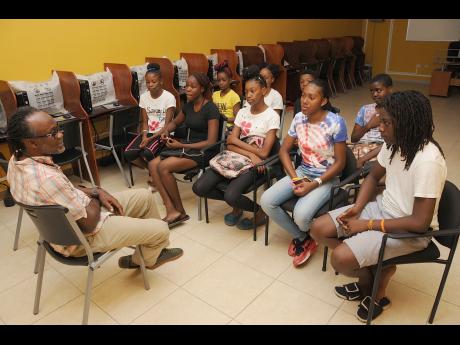 Lionel Rookwood
President of the Waterhouse Community Development Benevolent Society, Christopher Constantine (left), in discussions with some of the children who attended the recent summer camp in the community.

The danger of having sex too early was one of the messages that resonated with the children who attended a just-concluded summer camp in the Corporate Area community of Waterhouse, which has been red-flagged as a hotspot for child sexual abuse.

Following a Sunday Gleaner report about the incidents involving children in the community, including claims that some mothers in the community were prostituting their daughters to adult men, the Paediatric Association of Jamaica (PAJ) through its advocacy arm decided to partner with the Waterhouse Community Development Committee, which hosts the annual summer camp, to take steps to treat with the issue.

Already it appears that the intervention has had a positive impact on the more than 100 children ages 3-17 who attended the camp held from July 10-28.

"This is my second year attending this summer programme and this one has helped me significantly because I have learnt about many things," 16-year-old Chrisann Gomez-Reynolds told our news team.

"I have learnt not to have sex at a tender age because if you start too early you will get damaged and it can mess up your future," said Chrisann.

She said before going into the camp she struggled with discipline, but now feels empowered to not let persons sway her to do wrong but to instead be a good influence to others.

"I really appreciated it because there are many persons who think of Waterhouse and the children and persons in here as bad people, but that is not true," said Chrisann.

"Yes, there are a few people who do misbehave but all they need is strong love and support. And for an organisation (PAJ) to come into our community and give us some of their time and encourage and support us and tell us some more about life, that is really wonderful and I appreciate them and thank them and wish for them to come back," she added.

The annual summer camp, which was normally held over two weeks, was extended to three weeks this time around to treat with the issue of sexual abuse.

A number of volunteers, including psychologists, representatives of Rise Life Management Services and officials from the Centre for Investigation of Sexual Offences & Child Abuse, entertained and educated the children in a variety of ways.

"There was this speaker who told us about the ghetto and shared that a lot of people from the inner city become doctors, lawyers, soldiers and all those things. So we know we can do better in life," 12-year-old Tyrece Wilson shared.

"I can also share with my friends at school that they should not have sex early because they can get certain kind of diseases, and when they are ready to have sex they should use a condom."

President of the Waterhouse Community Development Benevolent Society, Christopher Constantine, explained that when the issue of child sexual abuse in the area was first highlighted in The Sunday Gleaner some resident reacted angrily because the community was highlighted in such a negative light.

"But instead of focusing on the image of the community we looked into it and understood that what the data was pushing out was not necessarily an attempt to paint the community in a negative way but to highlight the issue of child abuse," said Constantine .

"And after seeing that there was just no way we could just sit back and say to ourselves we are not going to pay any attention to it.

"It is an ongoing initiative with the PAJ. So we started off with the children because they are the main targets, and the next step will be the parents and then after that we want to do some ongoing work within the community, especially some of those areas that were highlighted in the article."

One parent workshop has already been held with approximately 25 parents, with others planned as the PAJ has committed to working in the community for next three years.

"We have been in discussions with established and renowned experts in the field who will assist us to implement the programmes," said Dr Tamra Tomlinson Morris, chairperson for the advocacy committee of the PAJ.

"We plan to use a system of facilitators where one set [of parents] will be trained and they will in turn train their peers and so on. In the next three years, we hope to have a vibrant, authoritative and successful parenting network in the community where each person also looks out for their neighbour's child.

"Fathers will also deliberately be targeted as their participation can actually improve the efficacy and success of any programme," said Tomlinson.