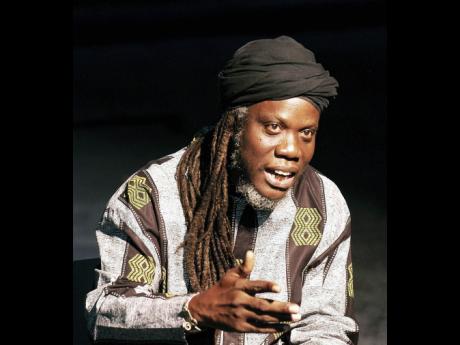 Dub poet, artiste and talk show host Mutabaruka rubbed shoulders with several European politicians and other dignitaries as he brought greetings from Jamaica to the 51st staging of the Ahmadiyya Muslim Jalsa Salana here in the United Kingdom (UK) last Saturday.

"Jamaicans, because of the lack of information, they don't understand what Islam is, and the news reports from the main media are not really helping them to understand it," said Mutabaruka, one of the favourites for Muslims attending the annual conference.

"So being an open-minded person and a Rastafarian, we feel that it is really important that we should come here and recognise that religion is religion, and people do things in the name of religion that are in conflict with the tenets of religion. So we give thanks for the invitation, and what we see here, we will take back to Jamaica and expound it," he said.

Over the three-day conference, Mutabaruka has been flocked for discussion and photographs from members of the Muslim community, especially from Pan-Africanists who are a part of some 35,000 people believed to be in attendance at the conference.

There have been several recent terrorist attacks in the UK, and thus, security at the conference is extremely high as organisers are wary of potential reprisals or further attacks from Muslim extremists who do not share the conference's message of 'peace and love for all and hatred for none'.

Participants, despite being preliminarily screened and logged, must go through a detailed security checks at several points before reaching the main tent, where they are again checked by security officials.

Almost all the dignitaries who brought greetings spoke of the devastating attacks in the UK and the unfair treatment of Muslims across the world. The Ahmadiyya Muslim Community is one of 73 sects of Muslims within the Islam faith.

Political representatives from Manchester, England, especially, bemoaned the suicide bombing attack which killed dozens of children attending a concert there recently, but said the attacks did not break the city, but, instead, brought persons from all religions closer together.

Meanwhile, Hadhrat Mirza Masroor Ahmed, spiritual leader of the community, urged Muslims to embrace and love humanity as they do their god.

"Our objective and goal is clearly the love of Allah Almighty, and in order to get that, we must have love for mankind," he said.