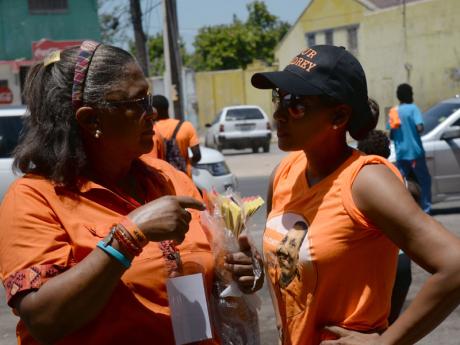 Heather Robinson, a long time ally of People's National Party president Dr Peter Phillips has revealed that she came under pressure from so called 'Solid' people because of her decision to support Audrey Smith Facey, the defeated candidate in the St Andrew South West selection conference yesterday.

Phillips, in his internal election campaigns for leadership positions, used the mantra 'Solid as a rock'.

Speaking this morning on Independent Talk on Power 106FM, Robinson asserted that it was felt her decision to support Smith Facey was a betrayal of her loyalty to Phillips.

But she said she remains confident in his ability to guide the party in a new direction.

Robinson, a spokesperson for Smith Facey's campaign team, also reported that the selection results were impacted because some supporters of the losing contender were "told" to say home.

However, she provided no further detail on that claim.

A day after, Smith Facey's camp is still unhappy that Brown Burke was allowed to contest the poll despite indicating her interest after the period had closed for expressions of interest.

Robinson also feels the nomination process was biased towards Brown Burke because she was favoured by the outgoing Member of Parliament, Portia Simpson Miller.

Another Smith Facey supporter, Central Manchester MP Peter Bunting, said the wrong signal was sent when the party secretariat decided to accommodate Brown Burke's entry after the deadline for expressions of interest.

Bunting said the party’s secretariat should not have circumvented the established procedure for candidate selection.

Meanwhile, Robinson says Brown Burke will now have to focus on mending the division that the bruising selection poll has created in St Andrew South West.