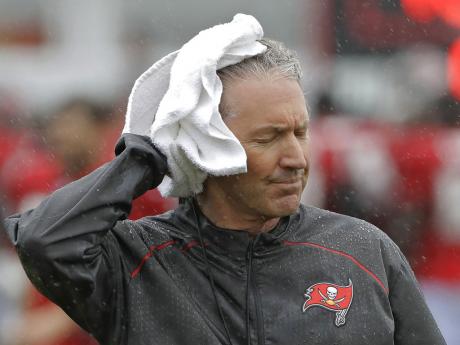 ST PETERSBURG, Florida (AP) —
Tropical Storm Emily churned ashore near Tampa Bay on Monday, starting a trek across the peninsula amid drenching rains and fears of scattered street flooding that prompted the governor to declare nearly half of Florida's counties in a state of emergency.

The National Hurricane Center said the ill-defined storm that sprang suddenly out of the Gulf of Mexico reached Florida's central Gulf Coast late Monday morning and was moving eastward at 9mph (15 kph).

The Miami-based center said, Emily was expected to weaken to a tropical depression while crossing Florida in the coming hours and then heading out into the Atlantic.

The Florida Highway Patrol closed the towering Sunshine Skyway Bridge over Tampa Bay on Monday morning because of high winds from Emily, which had maximum sustained winds of 45 mph (75 kph) as it crawled ashore.

In an email, Sergeant Steve Gaskins urged motorists to seek other routes after gusts at the bridge were clocked at more than 60 mph (95 kph).

Forecasters say Emily was expected to dump between two and four inches (50 to 100 millimeters) of rain through Monday night between the Tampa bay area and Naples, with isolated amounts up to eight inches (200 millimeters) in spots.

A flood watch is in effect for much of the Tampa area, raising the threat of some scattered street flooding in low-lying areas.

Law enforcement agencies urged motorists to drive with caution on a day that began as a miserable Monday morning commute for many.

A few Tampa area communities, such as Pinellas Park and Tarpon Springs, offered residents sandbags to stave off any flooding.

Florida Governor Rick Scott on Monday declared a state of emergency for 31 of the state's 67 counties as the rains settled in.

He headed to the state's Emergency Operations Center for a briefing on the storm and issued a news release urging those in the path of the storm to be vigilant as it crosses Florida.

Forecasters were also warning of possible isolated tornadoes and offshore waterspouts from the system, which was already sending swirling rain bands across large areas of south Florida.

A tropical storm warning was in effect from the Anclote River to Bonita Beach on the Gulf Coast as the storm came ashore.