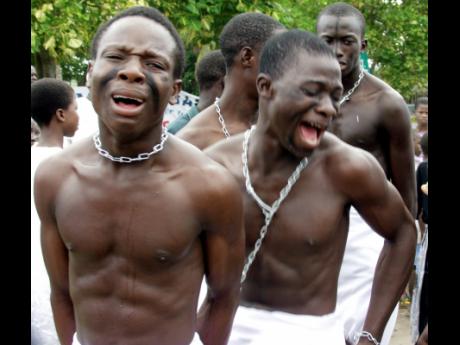 File
A reenactment of slavery. 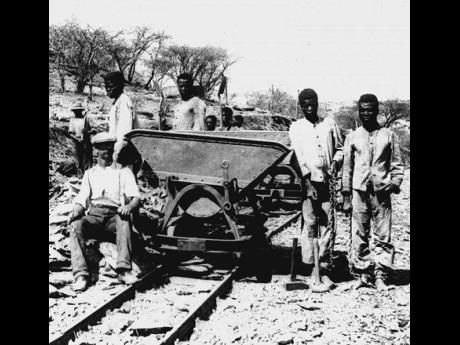 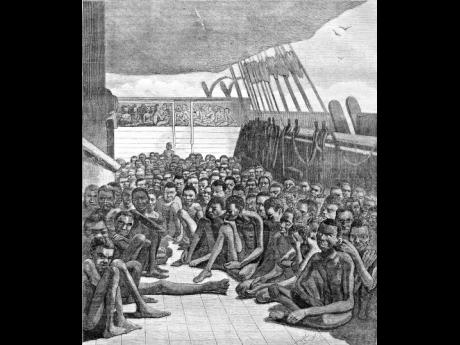 The anniversary of Emancipation provides the opportunity to explore the rarely discussed phenomenon of Jamaica's black and coloured slave owners. In 1833, the year the British Parliament passed the Emancipation Act, an estimate of Jamaica's population showed 16,600 whites, 31,300 free coloured, 11,000 free blacks, and 311,000 enslaved Africans and people of African descent. Interestingly, the free coloured and black population included the owners of some 70,000 enslaved Africans (R. Montgomery Martin, 1854). How do we explain this seemingly contradictory development?

... The growth of the black and coloured population

Whereas the growth of the black population was the result of the forced transportation of some 700,000 enslaved Africans to the island to provide labour for the plantation economy, the coloured population came into existence as the progeny of enslaved African women and white British colonists.

In the early period of British colonisation, women were in short supply. In 1661, a mere six years after the British captured the island from Spain, the white adult population of Jamaica had been reduced to 2,458 men and 454 women. This shortage was temporarily eased by the rounding up of prostitutes from the streets of London and Dublin for trans-shipment to Jamaica, for those British colonists who did not find the prospect of "Maroon women and Negresses to solace them" appealing. However, this might not have been the view of the majority of the white men who found black women irresistible. "Beautiful are their forms in general, and easy and graceful are their movements which indeed appear to me so striking that they cannot fail to excite the admiration of anyone" (M.G. Lewis). The attraction extended all the way to the top of British officialdom on the island. The Duke of Manchester, a governor of Jamaica, was "a begetter of numerous brown-skinned illegitimate progeny".

Black women also had a special appeal to British army officers stationed at Up Park Camp who credited them with miraculous healing powers. These women often combined the roles of nurse and mistress, and in return for services rendered, were often manumitted.

...The emergence and socio-economic status of black and coloured slave owners

The first black slave owners were the Maroons, whose leaders signed a treaty with the British in 1739 that obliged them to return to their former owners all of the enslaved runaways who had joined their ranks within three years and "to suppress and destroy all other ... rebellious Negroes". As a reward, a number of Maroons were allowed to own slaves in the post-treaty period. It seems that the Maroons became such enthusiastic slave owners that the Assembly, in 1744, made the sale of slaves to the Maroons illegal. The practice continued as was confirmed in a report by the superintendent general of Maroon towns in 1773 of Maroon officers owning slaves that were unaccounted for.

The emergence of the coloured slave owners was accelerated by the practice of white men to bequeath substantial property and slaves to their progeny born out of wedlock. The wills of forty-two legislators elected to the Assembly before 1833 showed that "38 per cent of these men acknowledged and left property to coloured mistresses, illegitimate children or both".

The black and coloured slave-owning group was urban based, where, with a small number of enslaved Africans, they could earn enough to significantly improve their quality of life. Some were engaged in the internal food-marketing trade, while others provided artisan services in the towns but were concentrated mainly in Kingston and Spanish Town.

A favourite occupation among female coloured slave owners was the operation of "boarding houses". White men were particularly welcome as clients. Perhaps the most celebrated "madam" was Couba Cornwallis of Port Royal, who nursed the celebrated British Admiral Horatio Nelson back to health after his illness during his stay in Jamaica. When he was moved from Couba's boarding house to the admiral's country residence in St Andrew, Nelson wrote to one of his friends, "Oh what would I give to be at Couba's lodgings at Port Royal".

While coloured and black slave owners were able to improve their economic status, both groups were ruthlessly discriminated against by the racist white planter/merchant class, which had exclusive control of the Legislature. The Deficiency Act of 1715 excluded free blacks and coloureds from holding supervisory positions on estates or plantations. Hence, even when they owned property, they had to employ white supervisors and managers. In 1761, the Assembly became alarmed at the amount of property bequeathed to coloureds and blacks and passed legislation prohibiting whites from leaving real or personal property worth more than £1,200 to any coloured or black.

In 1734, another piece of legislation prohibited free coloureds and blacks from employment as navigators or as drivers of carriages for hire since both jobs were reserved for whites. Coloured and black slave owners were further discriminated against by a law that required those who did not own land and at least 10 slaves to wear a blue cross on their right shoulder. In this racist environment, the coloured slave owners seemed to have had more social access than their black counterparts. By 1822, coloured children formed the majority of the student body at Wolmer's Free School.

Interestingly, reports from the period indicate that coloured slave owners were particularly harsh with their enslaved Africans. This was confirmed by a common saying among the enslaved: "If me fi have massa or misses, give me Buckra one. No give me mulatto. Dem no use neaga well."

... The struggle for civil rights

The civil rights of coloured and black slave owners were restricted by an act of 1711 that made it an offence to employ a free coloured or black in public office. In 1733, they lost the right to vote and were not allowed to give evidence in court against whites and were barred from serving on juries.

Their struggle for civil rights was strengthened by the abolition campaign in Britain, particularly after 1823 when the Anti-slavery Society intensified its campaign. This led to a radical change in the social attitude of leading members of the white planter/merchant ruling class. Faced with imminent passage of the Emancipation Act, Richard Barrett, the custos of St James, urged his white planter colleagues to grant civil rights to black and coloured slave owners in order to encourage them to join the whites in a slave owners' alliance against the abolitionists.

In December 1830, the Jamaican Assembly passed a General Privilege Bill granting civil rights to free coloureds and blacks, and a year later, the first two coloured men, Price Watkis and John Manderson, were elected to the Assembly. However, contrary to Custos Barrett's expectations, neither man sided with the white legislators. Watkis declared himself to be "one of the people ... attached to the people by birth and every other sympathy", while Manderson, the great-great-grandfather of the outstanding patriot Phillip Manderson Sherlock, stood bail for the missionaries after the Sam Sharpe Rebellion.

The Emancipation Act was passed by the British Parliament in 1833, which brought an end to plantation slavery in Jamaica.

- Arnold Bertram is a historian and former Cabinet minister. His email address is redev.atb@gmail.com.