I am ready for London dominance - Bolt 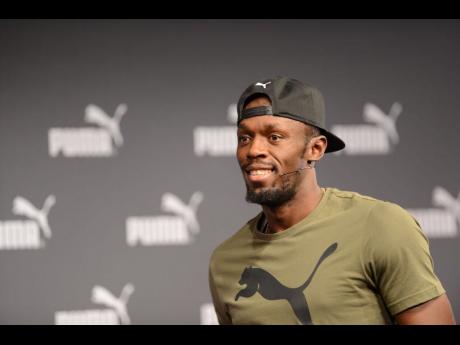 Usain Bolt arrives for the Puma press conference at The Brewery in London. - Ricardo Makyn Photo

LONDON, England:
Sprint king Usain Bolt may not have had the best build-up to the 2017 World Championships, which gets going later this week, but the Jamaican says he has no doubts about his readiness to defend his 100m title inside the London Olympic Stadium on Saturday.

Bolt will take his spot in Friday’s heats with a point to prove after only going under 10 seconds once this season in his three starts in the event; representing his least convincing season.

His form has led to a number of the world's upcoming athletes expressing added confidence that the eight-time Olympic champion is vulnerable.

However, Bolt said he is certain that he will be able to again top the podium at a major championship and secure what would be his 12th gold medal at the World Championships.

“Yes, without a doubt (I am ready),” Bolt told reporters on Monday. “If I show up at a championship; if I am here, then it means I am fully confident and ready to go. As long as I show up and my coach is happy, then I am ready to go.”

“The last race I ran was 9.95 seconds and it shows I am going in the right direction. After these two races in the 100m I am always going forward. It’s a championships, it’s all about who can keep their nerve. I have been here a lot of times. It’s go time!” Bolt added.

Bolt also received a specially-designed pair of purple and gold spikes from his long time sponsors Puma with the sprinter himself explaining that he purple represented the colour of his high school William Knibb Memorial High with the gold of course covering his gold medal laden career.

Bolt was of course asked about the threat of young sprinters such as Andre de Grasse, who has publicly stated that he believes he is capable and ready to dethrone Bolt this weekend, with the Jamaican underlining his fitness and mental fortitude ahead of what should be an exciting clash.

He also added that he will be dedicating his competition to deceased friend and former Jamaican – born British high jumper Germaine Mason who died earlier this year in an accident.