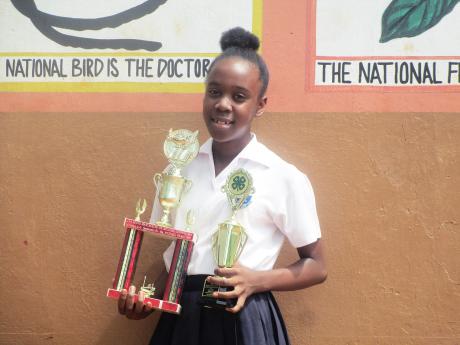 The Principal and staff of Campbell's Castle Primary and Infant School have struck 'gold' again as they have produced another government scholarship winner based on the outstanding results of their student, Beyonce Brown, in the Grade Six Achievement Test (GSAT).

The principal, Reverend Owen Lambert, was very clear and defiant when he told the parents and well-wishers at the school-leaving ceremony, held recently, that he has a keen interest in pursuing "excellence" in the academic curriculum of his school. He said that while other areas of study are also important, he felt it was even more so that the children who are under his care and guidance get an excellent foundation in the academic subjects, as this will give them a good start to pursue their dreams and ambitions later in their lives.

The community of Farm District is situated in deep, rural south Manchester and it is home to Beyonce Brown, her mother Nicola Robinson, and her father Claude Brown. She attended the Campbell's Castle Primary and Infant School and from an early age, Beyonce showed her brilliant academic abilities. Her mother, known as 'Michelle' to the community, said that from an early age Beyonce preferred to play with books rather than regular toys. She has always placed first in every class from infant school to grade six at the primary level. No matter the challenge, Beyonce always emerged as the first-place winner or was at the top of the competition.

Her third-grade teacher saw this winning attitude and trait in Beyonce and nick-named her 'Beautiful, Brilliant B'. Beyonce excels not only in the academic subjects, but has excelled as an all-rounder in a number of extra-curricular activities. She has won several trophies and medals in 4-H competitions, both at the parish and the national levels. She was twice the South Manchester Spelling Bee Competition in the grades one to three category and also at the grades four to six category. At the Math Olympia which took place at the University of the West Indies, where thousands of students from schools across Jamaica participated, Beyonce placed in the top 10.

Beyonce showed her amazing brilliance and academic prowess when the results of this year's Grade Six Achievement Test (G-SAT) was released. Her grades were as follows: language arts, 100%; mathematics, 100%; science, 98%; social studies, 98%; and communication task, 12/12.

This outstanding achievement gave her an average of 99% and she was placed at the school of her first choice, deCarteret College, situated in Mandeville. Beyonce has won a government scholarship for academic excellence.

Her mother was overcome with emotion as she watched her daughter leave her seat to collect the many prizes, certificates and trophies she received. She thanked the principal, and teachers at Campbell's Castle Primary and Infant School for helping her daughter to achieve excellence in academics and extra-curricular activities.