Diary of a Ghetto Priest | Learning to Love 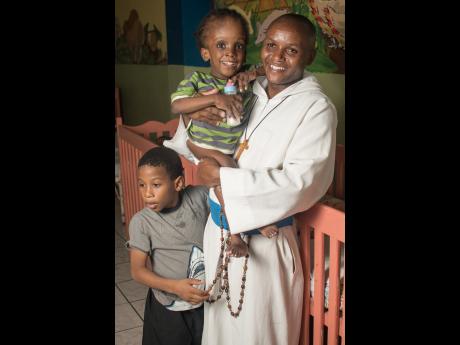 Contributed
Brother Alphonse with the special kids from Bethlehem Home. 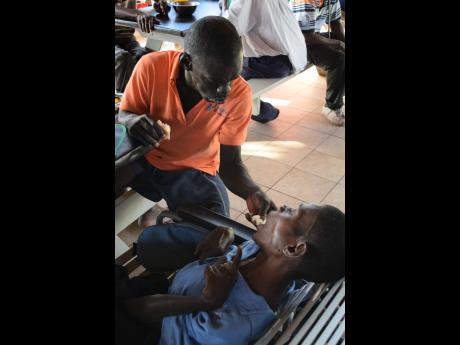 Contributed
Residents from Good Shepherd Home feeding each other in love.
1
2

Brother Alphonse told me "I keep on learning what is the meaning of love".

He smiled and shook his head.

Then, he related how many people come to Good Shepherd, and to all our centres.

The overall in charge of the centres, Brother Louima told me: "Many times we receive 25 calls in one day to take in more homeless and destitute people."

Our home at Good Shepherd on Tower Street is packed with homeless men. Everyday there are calls, and, in addition, there are those who come to have their wounds bound, to receive a little food, or to go to the toilet.

When I asked Brother Alphonse two days ago, what happened why does he look upset, he had just come back from Good Shepherd, "Mr Alexander Goodison died."

He sat down and related the story of Alexander's stay at our centre the past year and a half.

Alexander had come to Good Shepherd asking "Please dress my wounds on my feet. They are running with pus."

Though in distress, he smiled. Alexander had two crutches for supporting him because he could not walk or move without them. When brother told him he could not because the Good Shepherd was packed, he broke into tears. His clothes were tattered, the wounds on his feet smelled terribly, his body had scratches and sores.

When Brother Alphonse looked at the man, his heart was moved. His heart was beckoning "Take him! Take him!" But the reality of the situation was that more than 70 homeless men was overwhelming.

"What do I do? This man will die in the streets. Dogs will lick his sores. People will laugh at him. Children might even stone him."

Brother Alphonse went to the chapel and prayed.

He decided he would take one step at a time. When he removed the bandages from Alexander's feet, he realised it was beyond him, the wounds were long, deep and raw. He sent Alexander to the hospital convinced that both feet might have to be amputated. All this time Brother Alphonse kept praying while working.

"Should I take him in? Where would he sleep? What about medical care? What about food? What about a wheelchair? Can we manage him? When he comes from the hospital, where will he go? He has no home. He sleeps among mad men, street men, along King Street."

After three hours at the hospital, Alexander called Brother Alphonse to pick him up.

"Where will you go?"

Alexander said to him: "You can do with me what you will. A little card board at Good Shepherd will be fine for me."

Brother Alphonse knows the rules. He cannot overcrowd our home. When he came back to Good Shepherd, Alexander begged to stay just one night. Brother Alphonse said "yes", but he has to sleep on a mattress on the ground. Alexander lighted up.

Brother asked: "What is wrong with you? Why all these wounds and sores?"

Alexander explained he had sepsis, excessive fluids in his stomach, the doctors could not do very much about it. He might have to go often to the hospital; Brother Alphonse wondered how he would manage.

One day added to another. Alexander proved to be a very joyful man. He prayed each day with brothers, he sang revivals with the other homeless, he wheeled around in his wheelchair, he fed the other men who could not feed themselves, he brought the incontinent to the toilet, he bathed them, he wiped them.

Alexander was filled with the Spirit. He laughed a lot, told stories, he played dominoes.

"You brothers are really my family. These other poor men are my brothers, now I really have a home."

Alexander died two days ago. All the homeless residents said they would miss him. On the days when he was in great pain when he would stay at the center, he refused to complain. He used to take others to the hospital for their appointments and wait for them. He moved around and wiped the walls and tables and even tried to sweep the floor.

Brother Alphonse told me: "Alexander always counted others more important than himself. I would ask him 'why do you do all that, Alexander?' He would reply, 'because of Jesus'. One of the residents named Donovan said 'No one will ever take the place of that man, he was a saintly man'. I keep learning to love, Father. I must always find space in my heart to love one more person."

The UWI hospital called for Alexander to have surgery just a week ago. He died before the surgery. Brother Alphonse wiped away his tears. He said to me "I really loved that man."