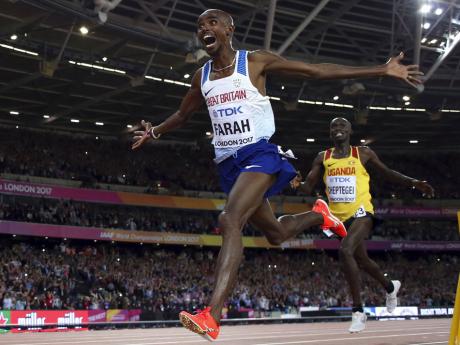 LONDON (AP) — It takes something to upstage Usain Bolt in an Olympic Stadium. Then again, there is only one long-distance runner quite like Mo Farah.

The British great came out onto the track Friday after Bolt had absorbed the adulation of the crowd just by showing up and coasting to victory in his opening 100-meter heat.

For Bolt it was easy.

Farah still had one of the toughest races of his life coming up — an all-out assault by the best African runners to wear him down to sap his finishing speed in the 10,000 metres.

There was even a trip and stumble on the final lap that could have felled him.

"I am mentally strong," said the 34-year-old Farah, who was born in Somalia but moved to Britain as a child.

There was no doubt about that after a 300-meter final kick that still left him with time to cross the finish line with arms outstretched and the same amazement in his eyes he had when winning his first Olympic gold in the same stadium five years ago.

"It was about believing in my sprint finish and knowing that I have been in that position before," Farah said.

The last time he was not in that position was when his sprint left him just short for gold at the 2011 world championships.

It was the last time he lost a big one, and his overpowering kick has always been his ticket to gold.

One year after that disappointing finish, Farah earned his first 5,000-10,000 double, and it was at his home Olympics in London.

His 10,000 win was the finale of what became known in British lore as "Super Saturday," when home athletes won three gold medals within an hour.

Another double might just be too good to resist.

Farah will now be preparing for the heats of the 5,000 meters on Wednesday.

If all goes to plan, he can then retire with Bolt on Saturday — both with two more gold medals around their necks.