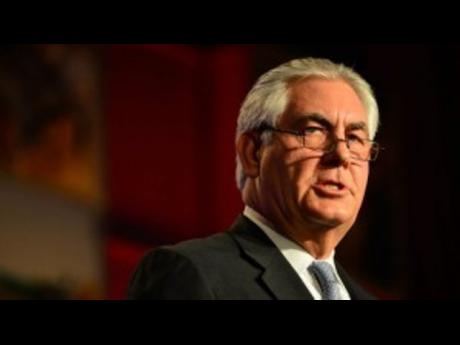 US Secretary of State Rex Tillerson

WASHINGTON, CMC – The Donald J. Trump administration in the United States has extended congratulatory message to the people of Jamaica on their 55th anniversary of political independence from Great Britain.

In a brief message, US Secretary of State Rex W. Tillerson said: “Jamaica plays an important role as a regional leader, most recently with its efforts on economic reform.

“We look forward to strengthened collaboration between our countries on security, prosperity, diplomacy, energy, education and health – as underscored in the United States-Caribbean Strategic Engagement Act,” he said.

“We deeply appreciate our relationship and congratulate all Jamaicans on the occasion of your Independence Day,” Tillerson added.

Jamaica’s Consul General in Miami, Franz Hall said: “one of the defining moments in the life of a country is the date on which it proclaims its independence to the community of nations.

“It is a bold statement, which encapsulates the dreams, aspirations and determination of a people to exert control over their own affairs,” he said in his message. “It is a declaration to the world of the desire to foster relations with other countries and to assume rights and obligations within the international system. It is asserting national identity through various symbols to the world.”

Hall said Jamaica continues to aspire and dream, “while making our unique and indelible contribution at the global community, far beyond the confines of our natural borders.”

This year, Jamaica’s independence is being celebrated under the theme “Celebrating Jamaicans at Home and Abroad”.

Hall said this theme recognises the “innate and unshakable bond that Jamaicans have with their homeland, wherever they are located in the world.

“It also praises the contribution that Jamaicans have made, and continue to make, to nation-building, whether at home or in the various places in which they have settled,” he said, stating that Jamaicans have excelled in various fields “and have risen to the pinnacle of achievement in business, the arts, the sciences, international politics and sports.

“Make no mistake about it, Jamaica’s influence on the world is tangible, and this is as a result of the strength, will and determination of the Jamaican spirit,” the consul general asserted.