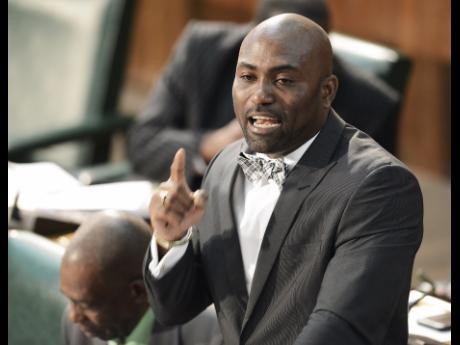 Science, Energy and Technology Minister Dr Andrew Wheatley says the Government's initiative to reduce energy consumption in ministries, departments and agencies has been an overwhelming success to date.

"As you might recall, the first half of the last decade saw the Government of Jamaica spending an average of $13 billion annually on energy consumption. This was not only unsustainable, it also posed a direct threat to the achievement of prosperity for all our people," said Wheatley, while speaking at the handing-over ceremony of energy-efficient units at the Jamaica Police Convalescent Centre (JPCC) in Black River, St Elizabeth, on Friday.

"Through the Energy Efficiency and Conservation Programme, the ministry continues to meet its goal of enhancing Jamaica's energy efficiency and conservation potential through the design and implementation of a number of projects, such as the installation of solar control films on windows of various government buildings, cool-roof applications to the roofs of the buildings, as well as retrofitting, removing and replacing old, inefficient air-condition units," he added.

According to Wheatley, the success the programme has been enjoying over the past three years has resulted in a significant reduction in the Government's energy bill.

"The success of the programme since its inception, just over three and a half years ago, has been encouraging. In addition to reducing energy usage by more than 10 gigawatts/hour, the Government has also saved more than J$100 million," he said.

The work carried out by the Petroleum Corporation of Jamaica at the JPCC involved a lighting-efficiency upgrade in 2013, and an extensive air-conditioning upgrade two years later. The initiative has realised savings of $3.5 million between February 2013 and June 2017.

The convalescent home was opened in 2006 by then Security Minister Dr Peter Phillips in response to concerns about the care of members of the Jamaica Constabulary Force who sustained injuries in the line of duty. It was made possible by an initial donation of $15 million by businessman Michael Lee-Chin.