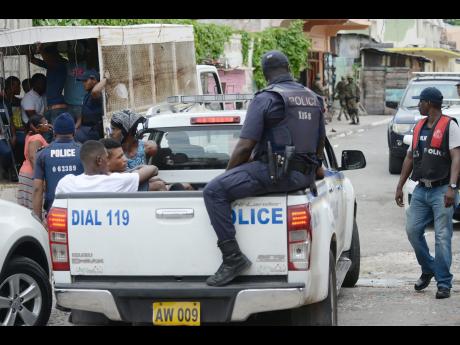 Jermaine Barnaby
The security forces now have stronger support in carrying out their duties in crime-prone communities across Jamaica with the passing of the Zones of Special Operations Act.

Concerns have been raised by members of the security forces that in their capacity as prescribed officers or attendance officers, they may be liable to pay $500,000 for failure to report evidence of child abuse, neglect, and where children are not attending school during special operations.

Under the Zones of Special Operations Act, they have the responsibility to report all cases of abuse and neglect concerning children, which should set the platform for the relevant state entities such as the Child Development Agency and the Office of the Children's Registry to move in and take charge of the situation.

Speaking with The Gleaner last week, Jamaica Defence Force legal officer Major Keva Chong said that based on the general feedback from members of the security forces, the consensus is that the various agencies will have to pull their weight for the law to work.

The question has been raised by police and military personnel as to what fines and penalties will be imposed on government agencies that fail to play their roles, even after the police and soldiers have identified and reported these cases to the relevant authorities.

"Their concern really was, if I have this responsibility and I have a fine attached if I don't report, then what is the fine or applicable punishment for state agencies or the Government on a whole when they fail to follow up matters, or when there are not enough homes for the children. They are really just making the point that the other agencies need to play their role as well. The Child Development Agency would be the primary one," she said.

Chong emphasised that even without the zones of special operations, thousands of child abuse and other cases have been reported to the Children's Registry, with very few ending up with charges being laid against persons.

"If you look at the latest figures of the Children's Registry, they stated how many cases they had for the year 2016 and how many cases have resulted in charges being laid, and how many were put in care and protection. They have over 3,000 reported cases. If we follow where those reported cases go, that's when you see the true statistics. What it said to me is that it is in a small number of cases where a child is placed in a home or an actual charge being laid. We expect that more matters will be reported under the zones of special operations because we have more eyes and ears, but where will those reports go and how will those reports be dealt with?" she added.

"Will we be seeing any increase in parents being brought before the court?" asked Chong.

"What is lacking, in my mind, is the services and power of the services. Do we have the manpower at the respective Government agencies, CDA in particular, to investigate reports?" she asked.

"Do we have the facilities to take children out of danger? Those are the kinds of questions that we think need to be answered. I had already spoken to Diahann Gordon Harrison," said Chung, referring to the children's advocate.

"She had given me the assurance that they are aware that the legislation (Zones of Special Operations Act) has been enacted. They don't have as much manpower as they would like, but they are working assiduously when they have cases reported to them," Chong said.