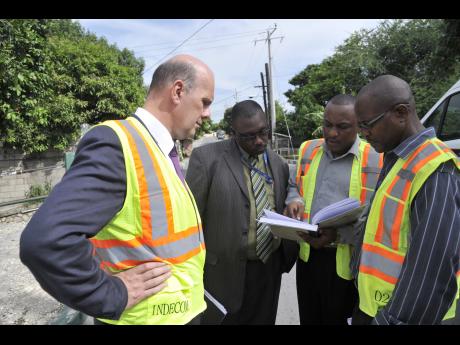 File
File Members of INDECOM going through an investigation after two men were killed by the police this morning.

Trevor Webb Sr, an ex-policeman and Jamaica Labour Party caretaker for Western St Andrew - which includes traditionally volatile areas such as Seaview Gardens and part of Olympic Gardens - is welcoming the special crime zones act but believes that the new law will be toothless as long as the Independent Commission of Investigations (INDECOM) hangs over the security forces' heads like the sword of Damocles.

Webb, a businessman who spent 10 years in the Jamaica Constabulary Force, and now operates a security firm and other businesses from within the constituency, said that aspects of the INDECOM Act have to be "repealed and replaced" from his experienced position as businessman-politician and ex-lawman.

"While I support having an independent body that will deal with investigating the police, some of the powers of INDECOM have to be amended, especially for the special crime zones act to be fully effective," Webb Sr insisted.

"Remember, we're coming from a position of having a policeman come in to investigate whenever there is an incident involving the police. Now, INDECOM questions you and you have to give a statement. That means I am a suspect, so I am entitled to have a lawyer.

"If you don't give a statement, they charge you. Everything starts there. You have to find money to pay a lawyer on a policeman's salary," Webb Sr pointed out, adding that police personnel on front-line duty are averse to the risk of being arrested by civilians in the garb of INDECOM.

Webb Sr said that the Government needs to find "middle ground", which will allow the police to work without fear but within the realm of law, regardless of whether there were any special zones of operations.

"Some powers need to be taken away from INDECOM so the police can work freely. INDECOM should not be arresting police officers. They are civilians. Let them investigate and send the file to the director of public prosecutions. Let that department rule.

"You can't have civilians arresting police. A lot of policemen are demoralised. If that's the case, why not make the INDECOM officers district constables so they can see what real police work is like? The police are not comfortable with civilians arresting them," Webb Sr insisted.

Citing an instance of what he described as the police not exposing themselves to the double whammy of gunmen and the Independent Commission of Investigations (INDECOM), Trevor Webb Sr, an ex-policeman and Jamaica Labour Party caretaker for Western St Andrew, gave an example of what he witnessed first-hand along Olympic Way recently.

"I am coming up Olympic Way on Sunday and guys are out in the middle of the road, less than a hundred yards from the police station, firing shots in the air at a funeral. The police didn't even come to look outside.

"That was about 3 p.m. Nobody wants to go out there. If a policeman goes out there and has to fire shots, his spent shells will be the first and only ones collected if something happens," Webb Sr pointed out.

"It has to be reviewed. You could have a million special zones out there. If you give the police and soldiers special powers while INDECOM can still arrest, you'll reach nowhere. The criminals are using INDECOM as a bull dog. Police have families and want to keep their jobs," he added.

"I do admit you have rogue police, and when caught, there must be consequences, but you can't have a situation in which the police are working but backing off because they are afraid of INDECOM."