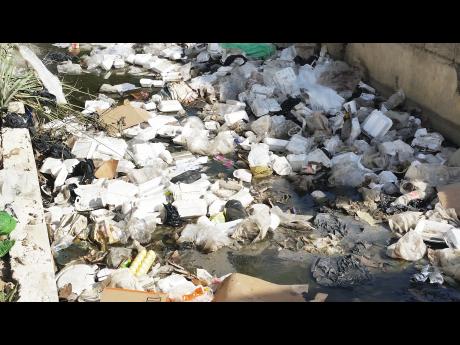 File
Garbage is strewn in the drain which runs near the Falmouth Municipal Market. Garbage collection could be a priority issue for the municipal corporation this year.

The Trelawny Municipal Corporation is projecting that it will require a budget of $420 million to carry out its business for the 2017-2018 financial year and acting chief financial officer Trevan Clayton has identified the sources from which the corporation expects to get the funds.

"The bulk of this income is expected to come from property tax, which should amount to $290 million," said Clayton. "This is to be further augmented by motor vehicle licence revenue, which is expected to amount to $91 million."

According to Clayton, additional sums will come from central government subvention and other established sources within the local government system.

"The corporation is also financed by a subvention from the Ministry of Local Government and Community Development. This subvention includes contributions to pensions and the poor," noted Clayton.

According to Clayton, from the projected income a total of $300 million is to be expended in areas such as public cleansing, garbage disposal and street lighting, among other services which are considered as priority. However, he said the councillors will have an input in determining what projects get attention.

"There are areas which we as officers believe are a priority," he said. "However, an opportunity is going to be given to councillors to reach out to their constituents. When this is done and residents indicate their preferences, the corporation will then make the decisions based on the recommendations of the councillors."

Two areas that are likely to get full attention during the year are street lighting and garbage collection, which are issues that have the potential to become contentious if not addressed adequately.

"As we speak, street lighting and garbage collection stand out based on the number of houses being built and the number of new residents, which means we need to increase the frequency of garbage collection," said Clayton. "The National Solid Waste Management Authority is in the process of establishing a holding area. When this is done, the time spent taking garbage to the Retirement Dump in St James will decrease, thereby allowing for more frequent garbage collection. That, I am sure, will be a priority area," Clayton said.