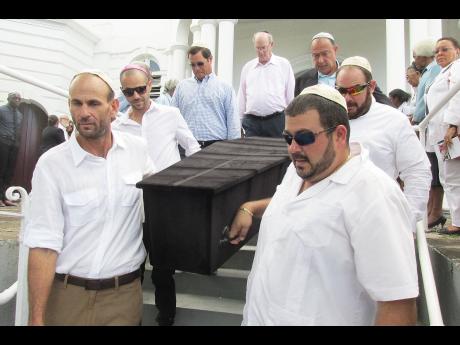 Evelyn Patricia Matalon (nee Mordecai), OD, JP, was small in physical stature, but at the thanksgiving service for her life, held inside Sha’are Shalom Synagogue at Duke Street in Kingston, on Tuesday, July 18, she was remembered as “a giant of a person”.

An eternal student, a graduate of St Andrew High School, Matalan’s achievements, including making a century at the crease of life, were many, and her indelible footprints are left all over her beloved parish of St Thomas, and beyond.

Marcia Bennett, the custos of the parish in which Matalon was born, at Belfast, on November 3, 1916, said, on behalf of the people of St Thomas, “We are thankful for the incredible privilege we have been given to have known her and shared in her life … St Thomas, and indeed Jamaica, has lost a true daughter.”

On behalf of the Matalon and Henriques families, Ainsley Henriques, one of Matalon’s three sons, remembered her as a “wonderful” and altruistic matriarch, who “adored” her grandchildren, and who preferred to be called ‘Ema’ (Mother), and not ‘Granny’. He recalled memorable moments of Evelyn Matalon’s long and interesting life, and the impact she has had on her family.

“She was the glue that held the family together, through thick and thin,” Henriques said of the woman who married Isaac Matalon.  And since she was the wife of the second brother, of seven, to be married, Henriques said, “May I suggest, in her humble way, that she was the conscience of that family.”

The family circle was broken on Saturday, July 15, and now Evelyn Patricia Matalon is lying in sweet repose in the Jewish Cemetery at Orange Street in Kingston. She is survived by two sons, two daughters, nine grandchildren, 15 great-grandchildren, and a host of other relatives.

At the service, reading from a prose, written by Matalon, herself, her grand-daughter, Stephanie Miller-Perera said, inter alia, “Let us take up the challenge to love and do something for someone outside of our family, daily. Only that way, we can feel and experience God’s grace.”