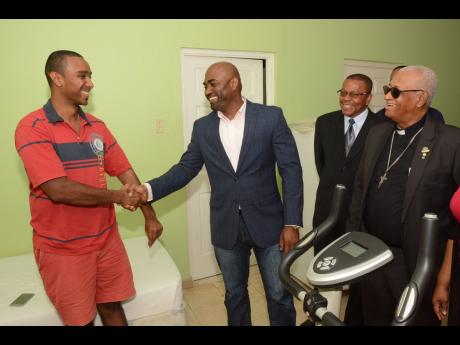 Contributed
Constable Earl Simpson (left), a patient at the Jamaica Police Convalescent Centre (JPCC); and Minister of Science, Energy and Technology Dr Andrew Wheatley (centre), were in a jovial mood when they met during the minister’s tour of the facility before the start of the handover ceremony for the two energy-efficiency projects that the Petroleum Corporation of Jamaica (PCJ) completed at the facility. The PCJ financed and executed the installation of energy-efficient lighting and air-conditioning units at the centre at a cost of $4 million. Also on hand for the ceremony were Deputy Commissioner of Police Wray Palmer (third left), and the Reverend Father Peter Clarke, chairman of the Oversight and Monitoring Committee, JPCC. The handover was held on August 4.

The overhaul of lighting and air-conditioning systems at the Jamaica Police Convalescent Centre (JPCC) in Black River, St Elizabeth, by the Petroleum Corporation of Jamaica (PCJ) has resulted in savings of more than J$3.5 million over the last four years.

The centre, which provides care for injured police officers who are wounded in the line of duty, was retrofitted with an energy-efficient air-conditioning system and low-energy lights. The interventions were financed and executed by the PCJ at a cost of J$4 million.

In 2013, the interior lights at the facility were replaced with light-emitting diode lamps and compact fluorescent lamps (CFL), while solar photovoltaic stand-alone lighting systems were placed throughout the exterior, and an external mercury vapour lamp was replaced with CFL dusk-to-dawn fixtures.

The air-conditioning upgrade, which followed in 2015, involved the installation of 18 mini-split inverter units with a combined capacity of 13 tons.

While speaking during a ceremony, which was held at the JPCC on August 4, Minister of Science, Energy & Technology Dr Andrew Wheatley said, "The $4 million spent on these projects is money well spent as research has shown that for every dollar that is invested in energy efficiency, at least three dollars can be saved, and the principle of savings from energy investment is certainly proving true with the projects the PCJ executed at the Jamaica Police Convalescent Centre."

He added: "I must commend the PCJ for their commitment to ensuring the Government spends less on energy without compromising on the quality of service we deliver for citizens or the job environment for our workers."

PCJ Group General Manager Winston Watson said, "The PCJ is happy to have undertaken these energy-intervention initiatives at the JPCC because a decrease in energy expenditure means more resources can be directed towards the centre's top priority, which is taking care of patients."