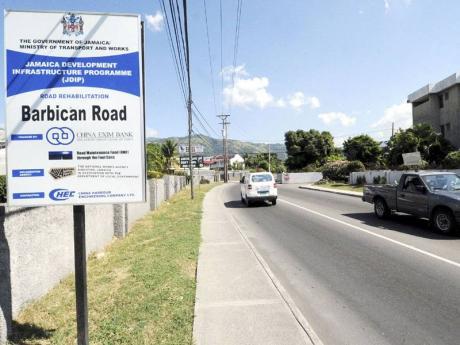 Work is to begin on August 25 on the Barbican Road Improvement Project which is expected to deliver a corridor that will be able to handle a high volume of traffic, in a more efficient manner.

At the contract signing yesterday, Prime Minister Andrew Holness noted that Barbican Road sits at the centre of a number of major arterial and collector roads in this section of St Andrew.

He said a 2016 count showed that the roadway carries upwards of 26,000 vehicles on a daily basis.

He said this creates significant congestion, often resulting in a virtual gridlock on several adjoining roadways.

He said a recent study showed that the average vehicular speed in peak hours along the roadway can slow to as low as 7 kilometres per hour, which is just above an average walking pace.

Yesterday, Holness outlined a number of changes to be made to improve the situation.

He also says 1.5 kilometre wide sidewalks and medians are to be constructed along the length of the carriageway.

This is another critical component, as the project seeks to improve the safety along the corridor and reduce the incidents of traffic collisions and accidents involving pedestrians.

The contractors have been issued instructions to commence work on the project on August 25, that’s an even 16 days from today. We look forward to a project that is completed on time and within budget.