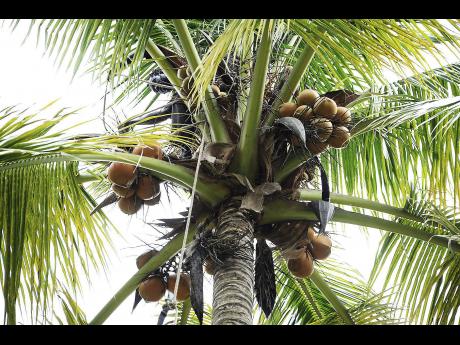 The Coconut Industry Board (CIB) has intensified its efforts to control the spread of the deadly Lethal Yellowing disease among coconuts.

Lethal Yellowing is caused by phytoplasma (a bacteria-like organism) which is transmitted by insect vectors from plant to plant. It is detrimental not only to coconuts but approximately 35 other species of palms.

Chairman of the CIB Christopher Gentles, said given the negative effects of the disease and its likely impact on coconut growers, it is imperative for the Board to provide information which can assist the nation’s farmers.

Gentles said this was particularly important if local farmers are to capitalise on the shortage of coconuts internationally.

“We want to create an early warning system such that outbreaks will be detected long before crops even start to display the signs,” said Gentles.

He added that due to Jamaica’s success in controlling the disease, the CIB was approached to study the transmission of diseases in coconut, including Lethal Yellowing.

Recently two projects were implemented of which the CIB is a participant; one through the Caribbean Agricultural Research and Development Institute (CARDI) in conjunction with the International Trade Centre and the other through the European Union.

According to Gentle, the CIB has joined with other international agencies to conduct extensive research on methods to control Lethal Yellowing as there is no known cure for the disease.

“The Coconut Industry Board urges all coconut growers to monitor their fields diligently and cut down any tree as soon as it begins to show signs of the disease.  The infected tree should be burnt after which a coconut seedling should be planted in its place.  Good field sanitation and proper plant nutrition must be practised to prevent devastation by the disease,” said Gentles.

The CIB provides free replacement plants to registered coconut growers who lose coconut trees as a result of the Lethal Yellowing Disease.