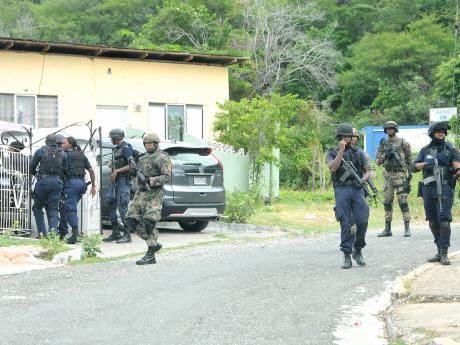 A resident of Jarrett Lane, in eastern St Andrew, is reporting that the community was this morning rocked by loud explosions, sounding like bombs, as a large contingent of soldiers and police began a massive pre-dawn operation.

The woman, who declined to give her name, said the explosions went off around 2:00 a.m in hills overlooking the community.

The police and residents say in the past two months rival gangs from Jarrett Lane and Oliver Road have been engaged in a bloody war that has resulted in a number of killings.

Police personnel on the ground told The Gleaner that the operation was part of an attempt to ease the tension and restore calm to the community.

Soldiers and police personnel, carrying high-powered rifles, were seen entering and searching a number of homes.

But amid the mounting tension, one resident said she was not comforted by the presence of the security forces.

She explained that most of her relatives are young men between the age of 14 and 18 years old and are at the mercy of the security forces.

"The police a wuk with information. Dem seh a the youths dem a fire the guns. But dem nah specify, dem jus a seh youths, so dem yute yah vulnerable," the women said.

"Their presence don’t create any security for me," she insisted.