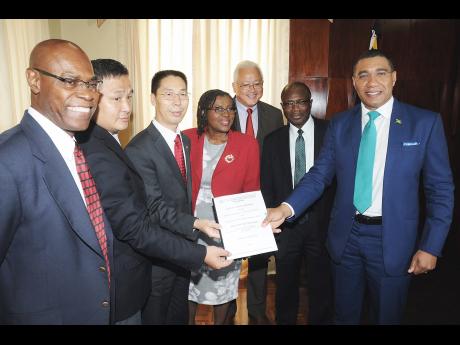 Liu Xiangang, project manager for China Harbour Engineering Company (CHEC), on Wednesday assured the Government that the US$4.4 million contract for upgrading a 1.1 kilometre section of Barbican Road, St Andrew, which is due to start on Friday, August 25, will meet the 120-day completion deadline.

"CHEC will carry out the work with high integrity and efficiency so that the project will be delivered on time and within budget," Liu told the contract-signing ceremony at Jamaica House.

WORK TO BE CARRIED OUT

It will include widening of the roadway to a four-lane carriageway running from the intersection with the Russell Heights main road and to Jacks Hill Road, as well as converting the one-way section of Barbican Road and the one way south-bound section of East Kings House Road to two-way traffic. Traffic lights will be installed at Birdsucker Lane, East Kings House Lane and the Jacks Hill Road intersection. Pedestrians will have the use of 1.5-metre-wide sidewalks and the roadway will be illuminated by LED lighting, with thermoplastic road marking and raised pavement markers among the improvements.

Meanwhile, the National Water Commission, through a separate contract valued at J$131 million, with the work to be done by Surrey Paving and Aggregate, will oversee the installation of well-needed water pipelines and expansion of the sewerage collection system. This will be done in tandem with CHEC.

This improvement is long overdue for the 3.57 kilometre corridor running from Grants Pen to Hope Road, where the daily traffic volume has been estimated at 26,000 vehicles. Major congestion from all directions, especially during morning peak hours and again when most people are returning from work, has made the daily commute a nightmare for motorists.

Prime Minister Andrew Holness put things in perspective by explaining that average vehicular speed during these bottleneck periods has been calculated at about seven kilometres per hour, which is just above the average walking pace.

It is projected that completion of the project will result in the following improvements:

- Reduction in the number of traffic crashes as a result of the improved road conditions, which will significantly cut the level of driver frustration.