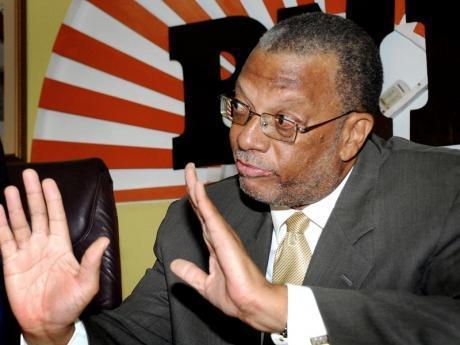 Phillips .... jested saying the one member advantage held by the government could be someone who is going to prison, is sick or is crazy.

The Opposition Leader Dr Peter Phillips is being criticised for a comment he made in St Ann North West last night claiming that the People's National Party (PNP) is ready to assume state power.

Phillips, in urging his supporters to be ready for a general election, reminded that the Government only has a one-member majority.

He jested saying that one member could be going to prison, is sick or is crazy.

In a statement this afternoon, the Jamaica Labour Party described Phillips' comments as distasteful.

"It is most unfortunate that hours after the comments were made that Dr Winston Green passed away. We extend our sympathy and prayers to the family," a JLP spokesperson said in the statement.

Green, a 58-year-old member of the PNP was the St Mary South East MP.

The JLP says it has been public knowledge that St Andrew North West MP Derrick Smith has been ill for sometime and has been undergoing extensive treatment.

According to the JLP, Smith is currently in good health and is recovering from his illness.

But it said it was disappointed that Phillips would count on the worst befalling one of his peers in his "thirsty" quest for power.

According to the JLP, Smith and his family were contacted by persons who saw Phillips' video on social media and assumed that the MP had worsened.

Son, Duane Smith who is also the councillor for the Chancery Hall Division of the Kingston and St Andrew Municipal Corporation, has sought to make it clear that his father is in the best of health and has thanked well-wishers for their prayers and well wishes.

The video has since been removed from the social media pages of Dr Phillips.