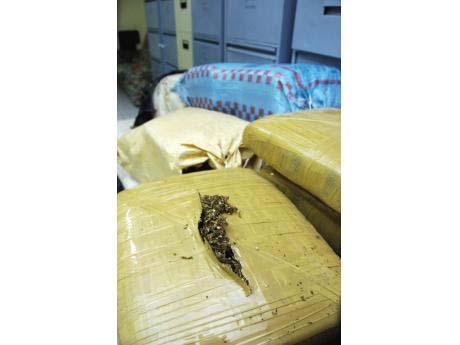 The police are continuing their investigations into the seizure of over $8 million worth of compressed ganja, along with a high-powered rifle during a six-hour police/military operation in Culloden, Westmoreland, yesterday.

A 52-year-old man of a Whitehouse, Westmoreland address was arrested in connection with the seizure of the drug weighing just over 2,000 pounds.

The police report that the man who was driving a red Toyota Hilux pickup, was stopped by a joint team from the Narcotics Police Division and the Jamaica Defence Force.

The team initiated a search of the pickup and 28 parcels of compressed ganja were found in the back.

The team reportedly conducted a further search of the roadway along the coastline and found a Toyota Hiace minibus parked with one of its side doors opened and the key in the ignition.

Another 371 parcels of ganja were found in the minivan.

The police say action will also be initiated under the Dangerous Drugs Act with the intention to forfeit the pickup and the minibus in which the ganja was found.