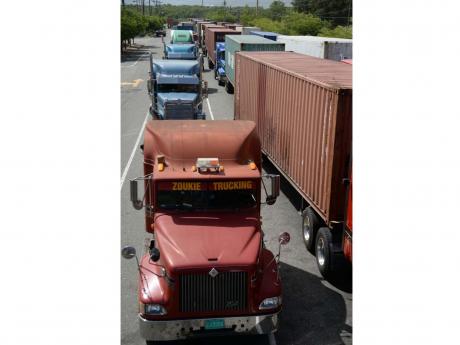 On Sunday several trailers waited in line for cargo at the Kingston Wharf.

Local exporters are bracing for huge losses as the pile-up of cargo at the Kingston Freeport Terminal continues to frustrate efforts to export products.

Many exporters are reportedly unable to meet delivery commitments to overseas customers as a result of the situation at the terminal.

Former president of the Jamaica Exporters Association (JEA), Marjorie Kennedy, says local companies are frustrated as they are unable to deliver products to the port so they can be loaded into containers for shipment.

Speaking on Real Business this morning, Kennedy said the pile-up of cargo at the terminal is a serious concern for exporters.

In addition to not being able to export products, Kennedy says manufacturers have having challenges getting raw material for production as they have been unable to clear containers sitting on the port.

She says there appears to be a serious management issue at Kingston Freeport Terminal Limited, which is responsible for operating the port.

The former president of the JEA says the situation is unacceptable.

Kennedy says the pile-up of cargo at Kingston Freeport Terminal has started to affect the unloading of ships.

She says there are ships waiting for days in the harbour to be unloaded.

The Gleaner/Power 106 News Centre tried to reach the Port Authority of Jamaica for a comment on the situation but was unsuccessful.