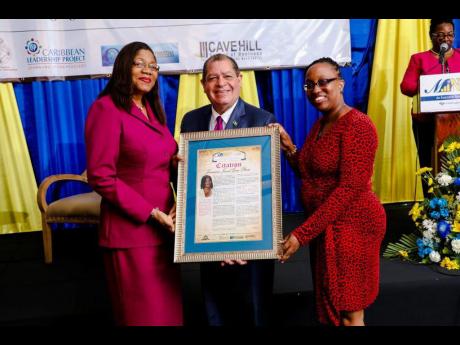 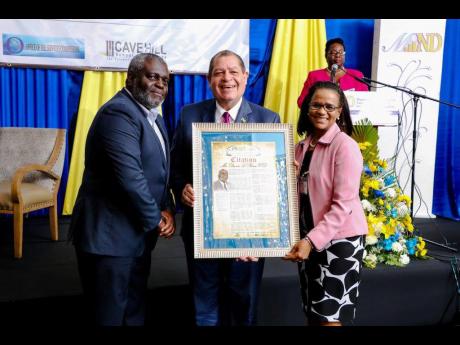 They are former financial secretary in the Ministry of Finance and the Public Service, Devon Rowe; and director of information and communication technology, Government of Dominica, Jermaine Jewel Jean-Pierre.

Director of Business Development and Communications at MIND, Marlene Campbell, says each year the theme of the conference impacts the selection criteria for the awards and both recipients have demonstrated, through their work as public servants, that they are worthy of this recognition.

She points out that, for this year, the awardees were selected based on how they demonstrated support for the transformation of the public service; effectively addressed a public-sector leadership challenge of high importance to ministries, departments and agencies; and promoted integrity and respect within the public service.

... Rowe has an extraordinarily brilliant mind

Devon Rowe, one of the two recipients of the Management Institute for National Development (MIND) Public Life Award for Leadership Excellence, is described as having an extraordinarily brilliant mind and is a distinguished public-service professional, authentic leader and a tough negotiator.

A career public servant, he was appointed Permanent Secretary in the Ministry of Local Government and Community Development in 2005, where he played a lead role in local government reform. Rowe was later assigned as Director General in the Office of the Prime Minister.

In 2010, he assumed the post of Director General in the Ministry of Finance and Planning with the main responsibility to centralise treasury management operations.

He also served as Financial Secretary in the Ministry of Finance and the Public Service between 2012 and 2016, and under his leadership, the Government improved public financial management and met all conditionalities under the Extended Fund Facility with the International Monetary Fund (IMF).

Rowe retired from the ministry in July 2016 and is presently the executive director of the Caribbean Centre for Development Administration (CARICAD).

CARICAD is a regional intergovernmental organisation specialising in transforming and modernising the public sector of Caribbean States.

The other recipient of the Management Institute for National Development (MIND) Public Life Award for Leadership Excellence, Meanwhile, Jermaine Jewel Jean-Pierre, is described as an innovative, dedicated and distinguished public-service educator, passionate community builder and an advocate of continuous learning and development.

Jean-Pierre is currently the Director of the Information and Communication Technology Unit, having joined the public service of the Commonwealth of Dominica in August 2000.

She has since chalked up an impressive record of achievements and is also well known and recognised at the regional level through her interaction with various regional and international agencies and intergovernmental bodies, such as the Caribbean Centre for Development Administration (CARICAD) and CARICOM.

Under her leadership, Dominica implemented a number of e-government initiatives to include the Online Employee Portal, Government of Dominica Online Mobile Application, and Document Management System.

According to Director of Business Development and Communications at MIND, Marlene Campbell, MIND is committed to providing the knowledge base required for globally competent and ethical public-sector leaders to advance the fulfilment of their organisation's mandate, in the interest of creating and sustaining national and regional growth and development and world-class exemplars of good governance in the global community.