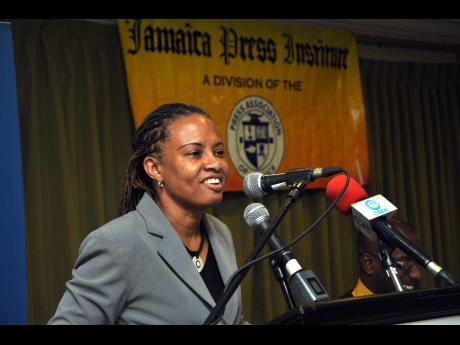 President of the Press Association of Jamaica (PAJ) Dionne Jackson Miller has charged that it is high time that government heeds the many calls for the long-promised amendments to the Access to Information (ATI) Act to be brought to Parliament, something that has been promised by successive administrations now for years.

“The Access to Information Act 2002 was a landmark statute, advancing as it did the aims of transparency and accountability in democratic government,” said Jackson Miller.

She noted that the Act gives any Jamaican a right to ask for government documents in which they have an interest, and subject to some exceptions, provides a regime which is supposed to ensure access to those documents.

“Government air quality reports, public health reports on water parks, cell phone bills of cabinet ministers and travel itineraries of prime ministers can be, and have been requested, and provided. But personal records held by government can also be requested by the individuals involved.

“The Act has been a powerful tool empowering members of the public seeking to hold government to account. But the law is not perfect, of course. Legislation rarely is, especially laws that introduce a completely new regime, which the ATI Act did.  This is why new laws often contain a provision for them to be reviewed within a certain period of time,” added Jackson Miller.

She noted that Section 38 of the ATI Act states that it “shall be reviewed from time to time by committee of both Houses of Parliament” and went on to state that “The first such review shall be conducted not later than two years after the appointed day.”

Jackson Miller further noted that a review did take place, albeit late.

“The Act came into effect in 2004. It was not until 2008, however, that both Houses of Parliament passed resolutions calling for the establishment of a Joint Select Committee to examine the Act and make recommendations arising from the review.

The PAJ president argued that the joint committee made some important recommendations even though it could have gone further to improve the Act even more.

“Nevertheless, enactment of those initial recommendations would give us a much better system than we now have.

The Press Association of Jamaica has, on several occasions, urged the government to take these promised amendments to Parliament.

“We are now renewing that call. We're not waiting for a special day, week or month to follow up this issue,” said Jackson Miller.