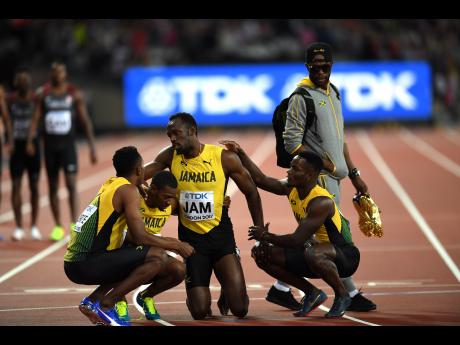 Ricardo Makyn
Helping a fallen neighbour, whatever the circumstances, makes us extraordinary winners!

Hello mi neighbour! I recently read where 'A runner who collapsed from heat stroke won a race with help from a competitor'. This occurred around the time Usain Bolt lost the final race of his career due to a hamstring injury in a 4x100 relay at the World Championships in London. But Usain remains a champion in the eyes of all!

The remarkable news out of Main, United States, underscores the point that helping others must always take precedence over money, power, competition, etc! At a 100 metres from the finish line, Jesse Orach who was leading in a 10K run, got a heat stroke, felt weak and gave up all hope of making it to finish line.

As his knees buckled, a competitor Robert Gomez, who could have easily passed him to win the race, instinctively stopped and helped Orach to first place, saying later, that "in the running community I feel camaraderie comes before competitiveness and could not allow Orach to fall because he ran a better race and deserved to win". And we all make Robert a bigger winner!

Helping a fallen neighbour, whatever the circumstances, makes us extraordinary winners! Doing kindness to others, including our enemies and "all who persecute and say all manner of evil against us falsely" attracts rewards beyond our expectations. Can't go wrong with divine design.

Orach's joy was more about the surprise act of kindness from an 'enemy' than winning the first prize. So overwhelmed was he, that his only comment at the interview was "I don't know what to say." But who would? People who are shocked out of their wits by kindness never seem to recover.

At another place where selflessness won the game, in the heat of a skiing race between two schools, a competitor's pole got broken. As he struggled to recover, something unusual occurred: the assistant coach for the other team rose from the sidelines and handed the fallen student a new pole, even as he cheered and tracked his own team. Unfortunately, the assistant coach's team lost in the end.

Like many others, this coach could have easily watched, feeling bad for the skier who fell, but happy for the advantage. Instead, he extended kindness to a kid who badly needed a helping hand.

"It was the right thing to do for a racer," he said. "I wanted our kids to win not by a technicality, but by their performance". Even though his team members were disappointed, they all agreed that their assistant coach did the right thing, making it a bittersweet outcome.

As you help someone to the finish line today, please remember that there's never a wrong time to do the right thing nor a right time to do the wrong thing.

- Sister Nelson, St Catherine - for clothing and a crib

- Neighbour - for donating a bed to a neighbour

- Margaret, St Catherine - for offering a bed to a neighbour

- Sandra - for offering a mosquito net to a neighbour. Still asking neighbour to call me 334-8165

- Neighbour - family of six sleeping on one bed. Asking for a bed and dresser

- Neighbour, St Thomas - asking for a whatnot, TV and chest-of-drawers

- Judith, Kingston - daughter, Kadianne, blind from birth, did very well in school and about to enter college and in need of a Mac computer specially designed for the visually challenged

- Cassandra - mother of two cries out: children's father died and she has no help. Unable to purchase books and uniforms for 15-year-old daughter.

Miss Rose, St Andrew - unemployed, asking for a refrigerator and a radio