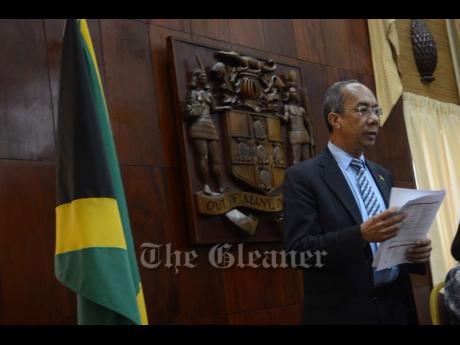 A senior member of the Andrew Holness administration has disclosed that the recently released Jamaica Constabulary Force (JCF) Administrative Review report has not been accepted by the Government.

The controversial report which cleared five cops of wrongdoing in the 2010 security operation in Tivoli Gardens has been rejected and denounced by several civil society, human rights groups and the Public Defender Arlene Harrison Henry.

But Dr Horace Chang, the minister without portfolio in the Ministry of Economic Growth and Job Creation, says the Government cannot accept the report at this time.

"We are not satisfied that we can accept that report," Chang said.

"It is not a good report and it is not reflecting well on the police force [given] where we are coming from," Chang added

He is the first minister of the administration to publicly comment on the report since its release.

Chang, a minister who is sometimes left in charge of the Government in the absence of the prime minister, would not definitely say whether the Government will ask the JCF to withdraw the report, but said it is 'likely we will go that way'.

Chang, while he is fully aware of the tough challenges JCF faced, he cautioned that the police response "cannot be to be a 'badda' gang than the gangs other there".

The minister said the Cabinet will be asking the minister of national security, Robert Montague, and the National Security Council to review the report and provide a full some response.

He was speaking on Nationwide Radio this morning.

Last week, Police Commissioner George Quallo declared at a Rotary meeting in Kingston that he is standing by the report.

Attorney General Marlene Malahoo Forte is to provide an opinion on the legal standing of the report.